It goes without saying that toys get remade for one reason and one reason alone: the almighty greenback. Usually, the perceived reason that a remake of a particular toy is a safe bet from an executive’s point of view is because the property the toy is based on is getting a re-released/updated movie in theaters (Star Wars) or getting a new TV show, (Teenage Mutant Ninja Turtles) or just because it’s something the kids who shop at Hot Topic love (ahem, Nightmare Before Christmas). But then, as you are probably aware, companies like Hot Toys, which not only create super-accurate toys of newer releases like Terminator: Salvation and The Dark Knight, but are also so kind to do justice to older licenses like Edward Scissorhands as well, just for the love of the game. Yes, we as the consumer have to pay dearly to play said game and get our hands on one of these sweet creations, but we’re glad to, because we know our toy was made with love, not because of a gold rush to cash in on the latest craze. Thus, in the spirit of so many properties getting their just due lately, this list is dedicated to the toylines that still need the proper remake treatment, mostly because the original toy manufacturer completely phoned it in to begin with.

The toyline Playmates created around the 1990 film Dick Tracy (starring ghetto superstar Warren Beatty) was weird for a few reasons. One, it featured a “two-way wrist watch” based on Dick Tracy’s in the movie that wasn’t a two-way anything. The problem started when any kid who had just become a proud owner of this item realized that he wasn’t going to communicate with anyone other than himself. According to the commercial, this so-called “two-way” watch told “SUPER-accurate time” (as opposed to mere regular, everyday, mortal, accurate time) and lit up at the press of a button, instead of say, calling your friend who was also sitting at home playing with his light-up watch while showering it in tears of disappointment. In the product’s defense, the packaging did only claim that it would let you “pretend to talk to Dick Tracy,” unlike the one thing it didn’t pretend to do — crush the dreams of would-be junior detectives everywhere. Unfortunately, the rest of the line didn’t turn out much better; I’m not really sure what happened in the meetings leading up to the mold-pouring of its figures, but instead of going for a sleek, actiony/noir look that one would assume would come as a natural extension of the feature film, Playmates vouched to give the line a bizarre, Oompa Loompa look instead that more closely resembled what a caricature of the film’s cast might look like than something you would associate any crime fighting activities with. It made the comic look sharp and nuanced by comparison. With the 20th anniversary of the film right around the corner, (and Dick Tracy fans always out there) toymakers could find a golden opportunity to make right this dark chapter in movie toy adaptation history. 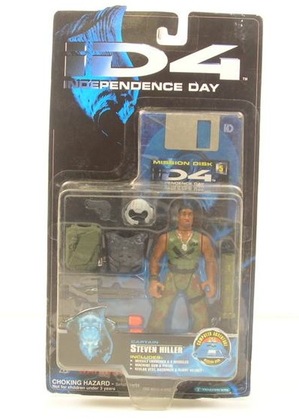 Will Smith and Jeff Goldblum vs. aliens! What a cool movie idea! The Independence Day toyline by Trendmasters! What poor execution! Could the above-pictured figure be Captain Steven Hiller, as portrayed by Will Smith in 1996’s blockbuster film Independence Day? Sure, it could be. It could also just as easily be anyone else, including your next door neighbor or Buford “Bubba” Blue from Forrest Gump. While the toyline did a justifiable job on the aliens from ID4 (as the kids called it in the day), it was probably pretty disheartening to have to use any of the figures from the human side of the line when defending Earth from the much cooler and far more thoughtfully designed aliens. The figures did come with floppy “Mission” discs though, so props for that I guess (assuming they were bothcompatible with Macs and alien spaceships). 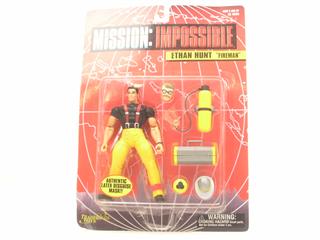 If you remember Tom Cruise action vehicle Mission: Impossible being a movie about a fireman who works out all the time and looks nothing like Tom Cruise, then boy do I have an accurate figure (and some questions) for you! However, if you’ve seen any of the trilogy recently, then you may notice that the toys pictured above, made by Tradewind, leave something to be desired in the likeness factor or the cool spy gear and tech aspect. Now, two movies, 13 years and many action figure friendly scenes later, we’re still left with the same two weak Ethan Hunt figures we started with in the original (and only) movie line.

Kenner’s figures for Bill and Ted’s Excellent Adventure were, admittedly, awesome. They might have been a little cartoon-y, but they rocked the hell out, including figures of Rufus (played by George Carlin), Gengis Khan, and even Abraham Lincoln. However, Kenner dropped the ball on making Death from Bill and Ted’s Bogus Journey, and we never got evil robot B&T dopplegangers either. So NECA, this one’s yours to lose — super-accurate movie figures of Bill, Ted, Rufus and Death, with evil robot variants. Don’t let us down.

Similar to Independence Day‘s line, the humans in Kenner’s Jurassic Park series got shafted for the real stars. Kenner’s dinosaur toys were amazing, with “realistic dinosaur skin”, cool sound effects and battle damage.The humans? Well, they looked human, but they sure didn’t look anything like Sam Neill or the other folks who appeared in the movie. Neill’s Alan Grant figure (above) is surprisingly calm as he appears to be in that hilarious trading card included in the package as those baby pterodactyls descend upon him; not only that, but Grant, complete with his trendy JP security badge and dino-snaring equipment, looks more like a park employee than a visitor in a theme park gone mad. In addition to the Grant mishap, it was apparently decided that Dennis Nedry (as portrayed by Newman in the film) would be best demonstrated in action figure form as a bad ass, heat-packing, Brooklyn detective who wears cool sunglasses all the time and is in tip-top physical condition, ready to take down any dilophosaurus standing between him and vast, black market-financed riches with his bare hands. 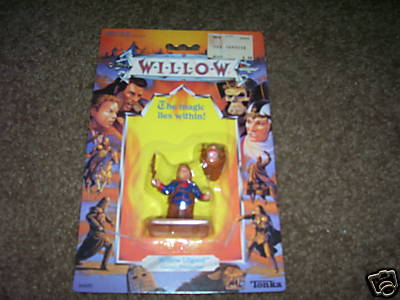 It’s
kind of shocking that a fantasy/action movie connected to the same guy
who made Star Wars hasn’t had millions of figures produced and
reproduced already, but there you have it. The figures for Willow
were easily the least spectacular on this list, as they had
approximately zero points of articulation, were made by Tonka (!) and
were somewhere between a Cracker Jack box prize and a Happy Meal toy in
terms of quality. Complete with the lame tag line “The Magic Lies
Within!” these toys were most magical when forgotten or given away.
That being said, Willow is still fondly remembered from many a
childhood and picking up your 1:6 Scale Willow or Madmartigan in the
likeness of Val “Iceman” Kilmer carries its intrigue. Come on toy
companies, the magic lies within you! 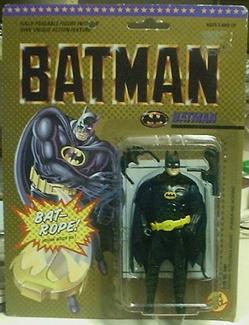 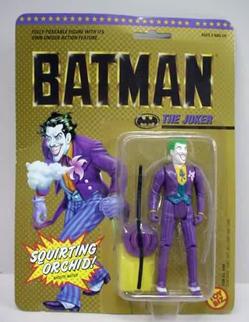 Tim Burton’s Batman rocked off the socks of not only diehard geeks the world over, but broke into the mainstream with such a ferocity that it paved the way for all superhero movies that came after it that wanted to take themselves seriously and be treated as more than just a comic book adaptation or toy commercial. Unfortunately, the company in charge of creating the action figures for Batman, Toy Biz, must not have gotten the memo. While the Batmobile was very cool and well made, (complete with “shields” cocoon), the figures of the characters themselves left much to be desired. Take the line’s Joker figure (above) which couldn’t resemble Jack Nicholson any less. Not only that, but Toy Biz failed to take advantage of the many cool possible outfits from the movie, such as the memorable smeared make-up look from the museum scene. The main Batman figure didn’t fare much better, being equipped with a bat rope/string mechanism tied to the utility belt that would come undone and disappear forever into the dark knight’s stomach after one or two uses, retrievable only if you were willing to break your batman figure open. As it stands to date, 20 years after the film’s release, we still don’t have a decent action figure in the likeness of Michael Keaton’s Batman or Jack Nicholson’s Joker. Come on toy makers; help us get those wonderful toys!