?As hopefully most of you know, I came down with a bad case of the nerd flu immediately upon returning home from SDCC (courtesy of Great White Snark; please tell him what an awful person he is in his comments). As much as I wanted to share my thoughts about the con as a whole, I couldn’t muster even my normal amount of meager brain power to do so. I think I’m back to half capacity now, so here goes:

? The worst part of the con was covering the con. Mostly because of free wireless at the San Diego Convention Center, which never loaded a single kilobyte for me. I don’t really blame the con for this; I mean, no one can really prepare for 200,000 nerds suddenly trying to use the same wireless system at once. But it did means every time I wanted to post, I had to truck 10 blocks back to my hotel, furiously write, run back to the con, see some stuff, then run back again. Ugh.
? The other part of the problem was the press pass, which was worthless. Wait, let me correct myself — it was worth a four-day pass, and not a penny more. It let press people into the con for free, but didn’t allow them to get into panels or events — the press had to wait in line like everyone else. I understand a lot of the “press” at the show were knuckleknobs with blogs with a few thousand readers, and they didn’t deserve more access than the regular fans. But I’d much rather there be some kind of criteria that the press needed to meet to get a pass, which would also allow them access to cover the panels — even if I was excluded. The fact that Wired couldn’t get in to see the Iron Man 2 panel still astounds me.
? And lest you think I just didn’t want to stand in line… yeah, I didn’t. You know why? because it was invariably worthless. Case in point, the Iron Man 2 panel — people stood in line for upwards of four hours. Because SDCC’s policy of not clearing the room between panels, almost everyone at the previous panel stayed seated (of course they did!). And only a few hundred people waiting in line got to go enter, while the other several thousand people who had been waiting — in some cases for four hours in the sun — were screwed.
? Furthermore, I know — I know that the lines for some of these panels were far longer than the panel rooms could accomodate, even if the rooms had been completely cleared out. So for some people there was always a 0% chance of making the panel, and SDCC let them line up anyways. As well-staffed as SDCC is, I would think they could easily have people cap the lines appropriately and keep this from happening.

?
? That said, it wasn’t all bad. Once I officially gave up on attending any of the panels, I actually had a great time — I bought a bunch of comics (the Dr. McNinja trades and a bunch of Fantagraphics books, including all the Maakies collections and the first Tales Designed to Thrizzle collection). And i got to meet and shake the hands of Mike Nelson, Bill Corbett and Kevin Murphy, the Rifftrax trio and my personal comedy heroes, and turned into a total imbecile around them (seriously, it was just like this, except less face touching). It really brought home SDCC’s ability to connect fans and stars to me, and how wonderful it was just to meet these guys. I hope everyone who went to SDCC had a similarly wonderful experience.
? The Flynn’s Arcade set-up rocked my world. I’m a huge Tron fan, so even though the con was generally low on spectacle, the whole faux-arcade-lightcycle-tokens-and-shirt-thing made me feel like SDCC was someplace truly special, which is what it should be.
? Also, I got to see a ton of friends, including Wizard ex-pats, my former anime industry pals, my AnimeVice proteg?s, and more. And I got to meet some of you readers at the TR meet-up, which was outstanding. And I got to meet the ladies and gentlemen of fine sites like /Film, First Showing, Geeks of Doom and more, and have dinner with them in the kitchen of a Chinese restaurant that had a regular seating section, but we were in the kitchen. Very strange. And I met Great White Snark, who seemed pleasant but totally gave me the nerd flu because he’s a huge bastard, the bastard.
? And I would be a total bastard if I didn’t call out two entities for awesomeness above and beyond during the con: first is the Wired Cafe, a place for SDCC elites to chill with free food, music, massages, coffee, and Patron tequila, put on by Wired. It was phenomenally awesome, and no, I never would have gotten in by myself — my Village Voice Media overlord dragged me in as his lackey. I had to rub his feet for a few hours, but after my sixth mojito I didn’t mind so much. 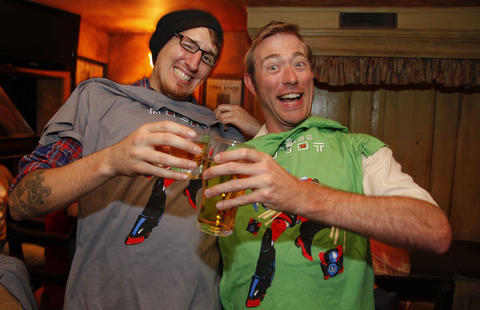 ?
? The other star was LA Weekly‘s Alexia Tsotsis, who singlehandedly made the meet-up happen. I had a great time meeting you people and giving out shirts, and it’s all because of her (I humbly ask you to check out her outstanding tribute to the regular nerds of SDCC — it’s pretty damn awesome). In fact, the only bad thing about the meet-up was that I picked the one bar in San Diego that apparently had no air conditioning, and as a husky nerd, put on my own one-man wet t-shirt contest — but the venue was my choice. Next year, I’m leaving it all in the lovely Alexia’s hands, and it will be even more awesome. I hope to see you there.