To paraphrase Mr. Spock, we would accept it as an axiom that villains are usually cooler, more bad-ass, and certainly more fun than heroes. It’s been common in literature for centuries: in the Beowulf poet’s delight of the gory details of Grendel’s slaughter of the Geats, in John Milton’s epic portrayal of Satan in Paradise Lost, in Mary Shelley’s tragic monster in Frankenstein. In comics, Batman, Spider-Man, and the Flash are popular largely because of their excellent rogues’ galleries. On television, viewers are more interested in Spike on Buffy, Baltar on Battlestar Galactica or Sylar on Heroes than their often whiny, ineffectual protagonists.

Star Trek, on the other hand, can boast just a handful of decent villains. This is partly because the various series were ostensibly as much about discovery and exploration as it was action and conflict–much of the time, the “villain” would turn out to just be misunderstood (or stupid–see the Pakleds, below). Of course, there were a few exceptionally good villains: Khan, Q, the Borg, Gul Dukat, and…um…well, anyway, for every decent villain, there were at least two dozen terrible antagonists. Here’s ten of the worst.

Aside from having possibly the goofiest Star Trek name ever, Kivas Fajo was best known as a galactic collector whose prize pieces included a Veltan sex idol and a Roger Maris rookie card. But the Holy Grail of his collection was Data, and in the episode “The Most Toys” Fajo staged the android’s death and kidnapped him. Using his own assistant’s life as collateral, Fajo threatened to kill her–and others–if Data didn’t take what amounted to an infinite time-out in his chair in the corner. Fajo was so annoying that even Data, an emotionless android, got pissed off and tried to shoot him.

On paper, the idea of having one of our familiar Voyager spacecraft from the 1970s turn out to be the true identity of a colossal alien spaceship must have seemed really high concept. But in Star Trek: The Motion Picture, V’Ger was something of a nonentity, an intergalactic MacGuffin designed primarily to bring the original Star Trek crew back together. Its abilities were limited to blasting ships, creating clones of bald chicks, and making movies seem really long and slow.

Invasion of the WoW players! In the Deep Space 9 episode “Move Along Home,” a race of gamers called the Wadi (complete with mullets and biker mustaches) get mad when Quark cheats at dabo, so they respond by placing the DS9 crew in a virtual game of D&D. Not only is the whole premise lame, but in the end in turns out it really was all a game and the players were never in any danger at all. Thrilling!

You know what never works? Star Trek and the supernatural. But that didn’t stop the producers from making “Sub Rosa,” a rare Dr. Crusher-centric episode that completely squanders the opportunity by making it about a ghost (oh, sorry, an “anaphasic alien”) who has been feeding off Crusher’s ancestors for centuries and spends most of his time living in a candle. Questions abound: how did he get to Earth originally in the first place? As a sentient life form, wouldn’t he get incredibly bored living inside generations of people? And why didn’t Crusher’s family ever upgrade to light bulbs sometime in the last 500 years? 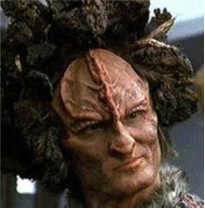 ?
With their wrinkly red skin and wild hair, the Kazon looked like badly sunburned versions of the already-goofy Centauri from Babylon 5. They were a mild nuisance to the crew of Voyager for the show’s first two seasons. At one point, Borg hottie Seven of Nine comments that the Borg had rejected the Kazon for assimilation. Ouch. Seriously, how much do you have to suck for the Borg not to take you?

Star Trek IV: The Voyager Home was an otherwise great movie except for one thing: the blatant plot device of the giant probe. Several miles long, it shows up out of nowhere, incapacitating starships before arriving on Earth looking for humpback whales. When it gets no response, it throws a tantrum of Biblical proportions, boiling the sea and plunging the world into disaster. An interesting threat for our heroes to face, but if you stop to think about it, what the hell is this thing’s deal? Why does it want to talk to whales — what could they possibly have to say? “Hey, the krill’s great this year”? Who the hell built this thing anyway, and why is it so gigantic? Maybe it was really just a humongous anal probe for the Earth itself.

The Pakleds were a space-faring race of fat morons who swiped all their technology from more advanced races. Nonetheless, they managed to kidnap Geordie La Forge in the Next Generation episode “Samaritan Snare” because, as an engineer, he was able to “make the ship go.” Fortunately, after the Enterprise flashed a few bright lights at them, they returned Geordi and ran away.

If you don’t remember the Son’a — or Star Trek: Insurrection — that’s because they were some of the most boring villains ever faced by Picard and company (and that’s saying something). Led by the goofily-named Adhar Ru’afo (played by F. Murray Abraham of Amadeus fame) the Son’a were obsessed with living forever and looking young, using machines to stretch their wrinkly skin over their faces. Basically a race of Joan Rivers, but without the fighting prowess.

It’s Picard vs. Dr. Evil! Star Trek: Nemesis introduced us to Shinzon, an evil Picard clone who becomes king of the Romulans along with a random new race of space orcs called Remans. Played by Tom Hardy, who messily devoured every piece of scenery in his general vicinity in every scene, Shinzon came across like a particularly bad villain from a Star Trek fanfic, and has the distinction of being the antagonist of the film that buried that first Star Trek canon.