Buying action figures related to your favorite cartoon/movie/TV show properties is one thing, but it takes a special kind of geek to go all-in and actually buy the toy that helps him literally become the hero he idolizes. Yes, dancing around the room doing ninja kicks or hiding behind the couch in stealth mode just wouldn’t be the same without the right tools of the trade at our disposal to further perpetuate our convoluted scenarios, assisting us in our fantastic journeys to Nerd Realm, the plane between fantasy and reality where our wildest dreams intersect with our backyards and fragile living room furnishings. Whether to defeat our darkest imaginary foes, assist us in our missions to save April O’Neil or just to put on display as relics of fictitious adventures past, these are the greatest toys for acting out our nerdiest of action fantasies. 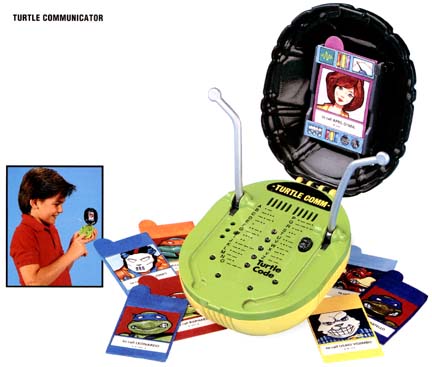 ?
This thing didn’t help us call our Turtle pals any more than the TMNT themselves loved anchovies on their pizzas, but this was one slick-looking piece of turtle gadgetry and still good enough to help us pretend we were actually communicating with someone. Lame Morse code feature and plastic fake-tennas aside, the thing at least kind of resembled the Turtle Comm of the cartoon, which was probably the most kids could expect in an era where only a high school student by the name of Zach Morris had a cell phone. While a later version did include voice effects and looked a lot more like the one on the cartoon show, we’re still hoping that someday it’ll be reissued to at least include walkie-talkie functionality or even with enough parts inside to work as a cell phone. Until then, how about an iPhone app so we can pretend to call Raphael or at least make our friends look like mutant animals when we call them?

Even though the Hulk Hands have been subject to multiple design revisions (and material makeovers) over the last few years, the art of punching your friends in the face in the name of fun was changed forever when the original version of these bad boys were released, creating cause to celebrate. Better still, as long as your batteries were up to par, each blow to your friend’s unwitting cranium was rewarded with “Hulk Smaaaash!” or “Rarrr!” among other sound effects. There was a similar product for Fantastic Four team member The Thing, but alas, Hulk > Thing so it never quite rose to the same level of awesomeness.

By the power of Grayskull…I have the power! Yes, the potentially underrated The New Adventures of He-Man doesn’t really hold an Eternian candle to the original He-Man and the Masters of the Universe TV show for most of us, but lifting this thing over your head to declare He-Man’s trademark phrase can easily make your day. Its light effects were dazzling and it had plenty of sweet motion-activated sounds to go around. It even powered down automatically, topping off what was truly the perfect weapon to assist in one’s fictional space quest to defeat and capture Skeletor, or to simply fight him off if he ever decided to break into your bedroom at night (as recreated in the commercial above). 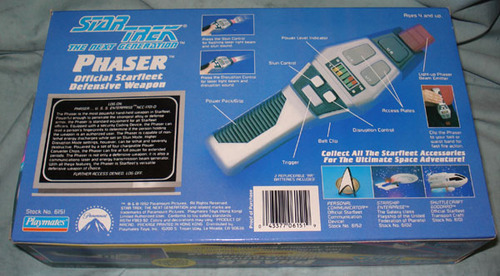 ?
Ranging from the original Star Trek series and its follow-up The Next Generation all the way (back?) to the recently released J.J. Abrams flick, this is obviously another toy that’s seen plenty of different appearances over the years. That being said, having the ability to set this device to stun and/or kill against any imaginary stray Romulan, Borg, or Klingon enemies is a privilege the toy geek takes as seriously as America takes its football. Now, if only we could get a reasonably well functioning transporter chamber that we could use to beam us in and out of toy stores at night… 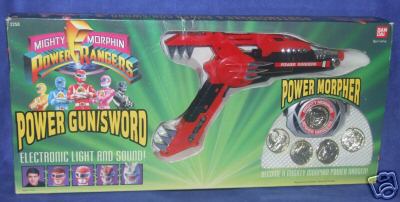 ?
You’ve just watched Bulk and Skull humiliate themselves for the umpeenth time and are about to sit down for a relaxing drink at Ernie’s Juice Bar with some of your Ranger friends when Zordon hits you up on your wrist communicator. You teleport to the Command Center for a briefing on Rita’s latest ridiculous monster, only to learn that it’s wreaking havoc on downtown Angel Grove. You reach behind your back and declare “It’s morphin’ time!” thrusting your Morpher before you, calling on the spirit of the prehistoric beast to which you’ve been assigned to transform into a spandex clad warrior whose guise is perfectly color coordinated with the sleeveless muscle tee you had on just moments before. Yes, we couldn’t all live the glorious lives of the Mighty Morphin Power Rangers like Jason, Kimberly, Trini, Zach, Billy, and Tommy, but we could dream, and the sweet Morpher that came with the toy set in question went a long way. The Power Morpher lit up, had built-in sound effects and came with all five original power coins. The package also included the super sweet Power Gun, which could convert to become the “Power Sword” (sorry He-Man) for close range combat, and looked like a T-Rex to boot, so dino- awesomeness points have to be awarded for that.

The closest we’ll probably ever get to transforming into a huge robot that can transform into a truck, the Optimus Prime Voice Changer Helmet not only does its best to change your voice so that you sound more like Peter Cullen, it also comes with actual voice samples from the original live-action Transformers movie and the unmistakable sound Transformers make when they change forms, all available at the press of the helmet’s buttons! Ar-er-ur-e-um!

?
When Tommy, a.k.a. the Green Ranger, was revealed to be (spoiler alert?) the White Ranger after several episodes of Power Ranger-ian intrigue, not only were we treated to a brand new awesome MMPR song (White Ranger Tiger Power! Ahhh Ahhh Ahhh!) and Zord (the White Tigerzord), we also learned of Tommy’s new weapon — Saba, Tommy’s new talking saber. You read that correctly — a sword that talks to you. Right on target, the toy version of Saba’s mouth moved and said a couple of things, just like the real Saba, making this toy a solid candidate for getting lost in your own imaginary battle with Lord Zedd’s minions. While Tommy’s previous weapon, the Dragon Dagger, has to get an honorable mention on this list, the talking tiger sword trumps it here, since Saba was not only a weapon, but a character on the show as well. We’re still waiting on the highly accurate reissue so we can ask Saba to string-float to the kitchen and fetch us a Coke when necessary.

While they don’t let us websling from skyscraper to skyscraper like the friendly neighborhood hero they’re inspired by, they do let us shoot faux web at people by pressing our middle and ring fingers into our palms, which is pretty sweet. All children have ever wanted to do was to be able to shoot fluids out of our wrists at people, and spidey’s webshooters — both the water and silly string varieties — have fullfilled this dream for millions of kids around the world.


See ghost. Blast ghost. Trap ghost. Viola. Really two toys that were originally sold separately, the Ghostbusters Proton Pack and Ghost Trap get the same-entry treatment because they fit together as perfectly as Dunk-a-Roo cookies and frosting. Perhaps the reason these were so amazing was not only because they looked so cool, but also because ghosts aren’t exactly known for their visibility, allowing us to turn up our ghost bustin’ imaginations to the max and feel like true Ghostbusters. Happy hunting!

You can learn a lot about a person if you notice a lightsaber in his or her bedroom. In most cases, you can assume you’ve made a friend. They’ve come a long way over the years, inspiring hundreds of YouTube videos and even guest starring on an episode of The Big Bang Theory, and this much is certain: whether staging an intergalactic battle in your underpants or using it as a prop to create your own Star Wars style effects on a home movie, the Force FX lightsaber’s lights, sound effects, motion activation, “retractable” blade and instant recognition factor make it easily the most iconic (and fun) piece of toy weaponry ever made, perfect for heroically prancing around the house and ruining family Thanksgivings in order to defeat the Sith year in and year out.