Menu
Home
>
Anime
>
This Disturbs Me on Almost Every Level 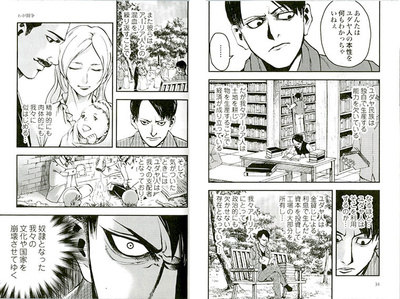 The Japanese publisher East Press has sold 45,000 copies of the manga version of Nazi dictator Adolf Hitler’s manifesto Mein Kampf, amid renewed calls to drop the manifesto’s ban in Germany. It has been illegal to publish Mein Kampf in Germany since 1945, and the government enforces the ban through an unusual application of copyright laws. …

However, Bavaria upheld the ban last month and rejected
the Munich-based Institute of Contemporary History’s request to publish
the book. Bavarian Finance Ministry spokesperson Horst Wolf said,
“Scholarly as the aims of the institute are, we won’t lift the ban as
it may play straight into the hands of the far-right.” On the separate
matter of the manga version, the ministry told the Asahi Shimbun paper, “We have trouble considering manga as an appropriate medium for critically presenting this problematic material.”

K?suke Maruo, a 32-year-old editor at East Press, explained why his company
produced the manga version of Mein Kampf: “It is a famous book, but
there are few who have read it. I think it is [studying]material for
knowing Hitler, a man synonymous with ‘devil,’ and what sort of
thinking created that level of tragedy.” While his company
had no expectations on the manga’s sales, it has sold 45,000 copies
since last November. That is above the 35,000-copy average of the other
books in the Manga de Dokuha series from East Press.

I cut out some stuff about the problematic history of Mein Kampf in Germany, BECAUSE HOLY FUCK THERE’S A MANGA VERSION OF MEIN KAMPF. THAT’S MANGA ADOLF HITLER ABOVE. THE MEIN KAMPF MANGA SOLD 45,000 COPIES IN GERMANY.