The playing of Dungeons & Dragons is, historically and practically, a male-dominated hobby. So one might think that this would make for an overabundance of scantily-clad chicks running populating the game itself. But strangely, it’s not especally so. Sure, there are your random near-naked elf prisoners to save, or the buxom wench at the tavern to clumsily chat up…but it rarely goes anywhere, since it’s a role-playing game, and chances are good that your DM is also a guy. Awk. Ward. Of course, the games and novel and other tie-ins are not entirely bereft of experience point-seeking female hotties, and these can linger in the memories of male players, just like the Cheeto dust lingers on their fingers. Here are the few, the proud — the sex symbols of D&D. 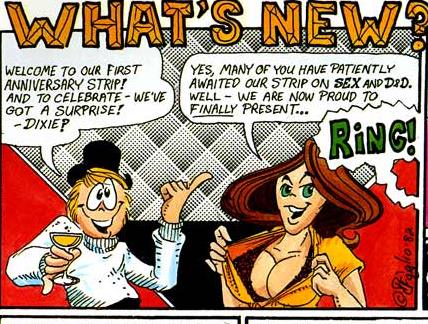 ?
Phil Foglio’s long-running “What’s New?” comic started in the back of Dragon
magazine, and introduced not just Phil himself, but his buxom co-host
and girlfriend Dixie. Dixie was not only hot, but
much smarter and more together than her male counterpart — and equally
interested in covering the always-teased “Sex and D&D.” 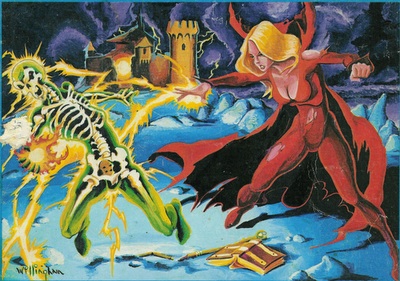 ?
We know nothing about this lady on the cover of this AD&D first edition adventure module, but still… Bone Hill indeed. 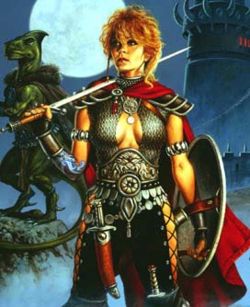 ?
Star of the 1988 Forgotten Realms novel Azure Bonds, Alias (no relation to Jennifer Garner) is a gorgeous strawberry-blonde, but with a difference. She’s a construct, built to serve… which makes her more or less the D&D version of Pris, Cherry 2000, Cameron, or any in a long line of hot and not-real women. Of course, she’s got the requisite existential angst that comes with being a not-real woman with real-enough emotions and questions of the soul — but really, if you’re stuck on that, you’re not paying close enough attention to the strategically-gapped armor she’s wearing.

?
The women of the Baldur’s Gate PC games were sort of a letdown: Imoen was a moon-faced whiner, and Skie was even worse. Jaheira is a complete bitch, Safana psychotic, Faldorn ridiculous-looking. Branwen had no personality, and Dynaheir had even less, plus a stupid name. Alora doesn’t show up until the end of the game, and Shar-Teel looks like she wants to eat your liver with some fava beans and a nice dwarven ale. Only Drow cleric Viconia had the looks and the personality both — totally worth staying just this side of Lawful Good to keep her on the team.

?
The heroine/damsel-in-distress of most of R.A. Salvatore’s Forgotten Realms books, Cat’s a gorgeous redhead, a badass with a bow, and raised by dwarves to be strong-willed and stubborn as hell. Still, she’s hampered a little bit by having a name that sounds like a cheese-based cat treat, and by the fact that no one in the Forgotten Realms is allowed to be as pretty as Drizzt. 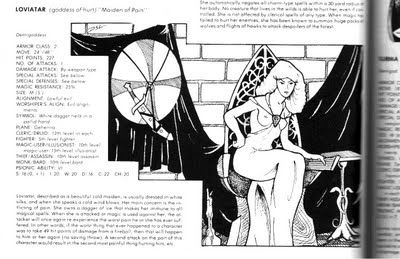 ?
Hand me the Deities & Demigod book… wait, is that a boob? Yep. Okay, I’m worshipping her. The boobage factor is frankly why there ended up being a disproportionately high number of male worshippers of not just Loviatar, but also: Aphrodite, Hecate, Ishtar, Isis, Tlazolteotl, Ushas, and Blibdoolpoolp (plus Elenoin…if you had the early edition with Melnibonian mythoi, that is). 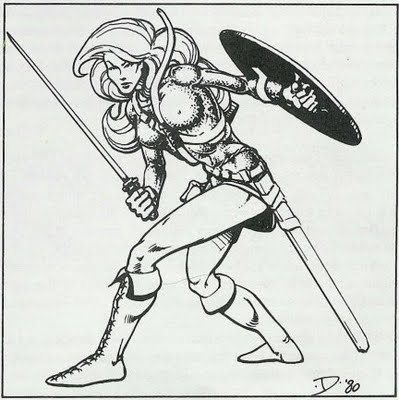 ?
Morgan Ironwolf was a female fighter back in the 1981 D&D Basic Set — she was Lawful, though she shed no tears when her friend Black Dougal failed his poison save and bit it. She had 16 strength, really big hair, and might well have been going commando under that Daisy-Duke armor she’s wearing. Most importantly, Morgan Ironwolf was so damn tough that her nipples were evident through chainmail. 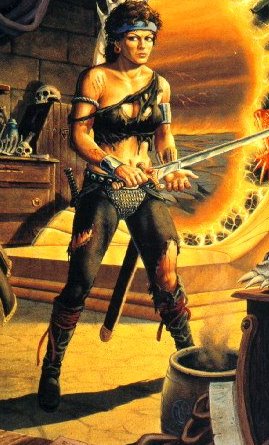 ?
In the Dragonlance stories, Tanis was always torn between the mostly evil Kit and the boring blonde Laurana, and it wasn’t because Kitiara was a scintillating conversationalist. Sure, Crysania was hot and self-destructive, Goldmoon rocked the buckskin hard and Tika was stacked. But face it: Kitiara was a total DHILF (Dragon Highlord I’d like to… you know). 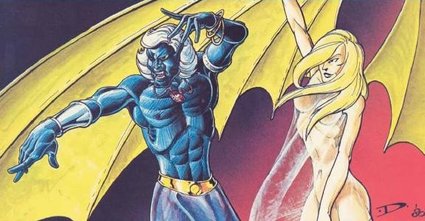 ?
Deep in the Vault of the Drow AD&D modules, succubus consort the vampire Belgos, Master of Rat and Bat…ah, screw it. The important thing was that Silussa got not one but two pictures of her doing her succubus thing — which is, of course, to prey on the sexual weakness of men. And when the men in question are role-players? Succubus smorgasbord.

1) Any Girl that Will Play

?
Seriously. For any guy who games, any girl that voluntarily rolls dice immediately goes up in magnitudes of hotness. And they usually know the rules better than you, too.