Menu
Home
>
TV
>
Jackie Brown Has a Stopover in Smallville 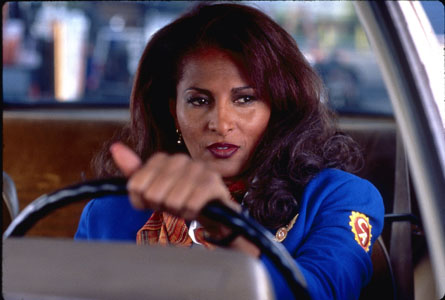 Smallville — the show that continually refuses to make you believe that a man can fly — continues its streak of inspired guest star casting with the announcement that Pam Grier (of Foxy/Jackie Brown fame, not to mention her scenery-chewing appearance as a transgendered pal of Snake Plissken’s in Escape from L.A.) will be portraying Justice League foe/Checkmate and Suicide Squad comics nasty Amanda Waller on the series. She’ll begin making life miserable for the show’s ever-increasing roster of heroes when she makes her debut in the Geoff Johns’ “Legends” episode airing later this season. It’s the two-parter that also ushers in the arrival of the JLA. Celebrate good times, come on!

Grier is an underrated actress who is always a welcome presence in whatever project she takes on, so it should be interesting to see her dive into a role as meaty as Waller. This isn’t her first foray into the world of DC superheroes either. She portrayed the Martian Manhunter’s wife with the overly complicated name My’ria’h in a two-part episode of the Justice League toon a few years back. And you thought you didn’t learn anything from reading Topless Robot.

If you are pissed that Smallville hasn’t gotten around to spotlighting your favorite DC character yet (Metamorpho!), give it time. At this rate the show will probably be on the air until 2074. (Via Newsarama). ? C.C.

Chris Cummins is a pop culture writer and Archie comics historian who has contributed to The Robot's Voice, Den of Geek US, Philebrity, Geekadelphia, Uproxx, and Unicorn Booty. He is the co-producer and co-host of Nerd Nite Philadelphia, and is regularly involved in producing and hosting New York Super Week events. In 2014, Chris began Sci-Fi Explosion, a mix of live performance, trivia and funny clips celebrating the weirdest in science fiction that regularly travels around the United States. He wrote the introductions to the compilations Archie's Favorite Comics From The Vault and (with Paul Castiglia) Archie's Favorite High School Stories. You can find Chris on Twitter at @bionicbigfoot and @scifiexplosion.