Menu
Home
>
TV
>
Top-Down Smackdown: If I Only Add a Kane 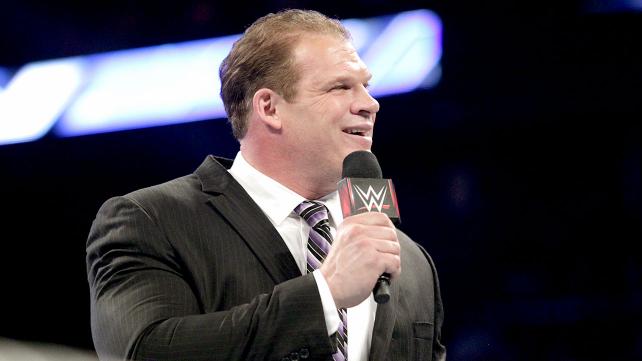 I have to say, I am unabashedly a fan of the acting work Glenn Jacobs has been doing as of late, and I even had the chance to tell him so – just by playing his fire-scarred demon character straight in increasingly absurd scenarios like group therapy, he brought new levels of entertainment to what was originally a fairly one-note, Michael Myers-type persona. The current gimmick, which has him now doing a split-personality/secret identity thing is a logical next step that allows him to play it both ways: in the corporate suit, Kane is a goofy chucklehead totally unaware he’s big enough to kill everyone in the room. But then he shows up in the demon mask with fire and apparent teleportation abilities, and all of a sudden you’ve got the demented side.

There’s really only one problem, and that’s that as an in-ring wrestler, Kane is mostly treated as a joke.

It was practically a running gag during the entire time Teddy Long was storyline manager of Smackdown. A bad guy would come out and misbehave somehow, then out would come Long: “Lemme holla at’cha, player! You see, tonight, you WILL be in a match…and it will be…against the DEMON KANE, playa! Holla!” The bad guy would act incredibly mad and scared that he was going to have to face such a scary, diabolical character…and then win the match, as always.

It’s my understanding (and impression from speaking with him once) that Jacobs is a quintessential nice guy, who’s happy to have a steady gig and likes helping other talents out by making them look good. In the process, however, he and WWE have devalued the threat his character is actually meant to pose. Long before Brock Lesnar, Kane was portrayed as the equal sibling of the Undertaker, who may not have won at WrestleMania, but beat his storyline brother many other times. He’s a former WWE and World champion, back when the two were different titles, and one of the great things about his run with Daniel Bryan was that he was allowed to win again.

He won’t beat Seth Rollins for the title, nor should he. But it would be nice, as fans, to believe that he plausibly could. Thanks to his work in a suit, we know that when he eventually retires from ring work, he can be a compelling character without needing to fight. But so long as he still can go, shouldn’t we be able to buy that he’s good at that too?