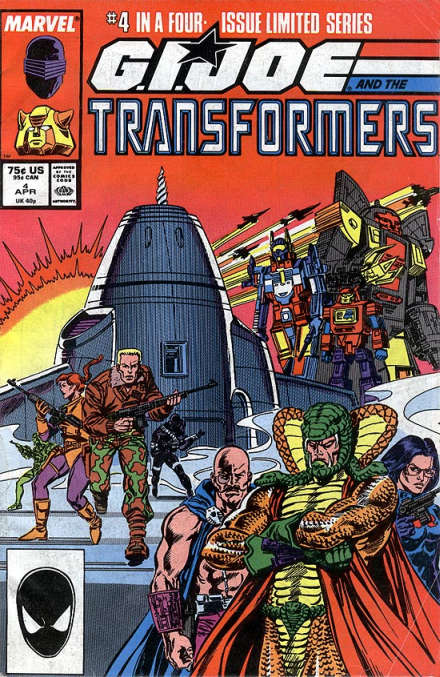 Shortly before his Jem-In-Name-Only movie crashed and burned at the box office, and got trashed AND burned by fans, director Jon M. Chu raised the interesting possibility of a mega-crossover film universe involving Jem, Transformers and G.I. Joe. By the time we read it, it was clear what a stinker Jem and the Holograms would be, so of course we all pointed and laughed. Chu on that!

But the more I think about it, the more I think it’s not such a bad idea, though I’d keep Chu away from anything like it for now, or at least put him on probation – I suspect he could have made a decent Jem movie had his original pitch been approved, but I’m not going to let him use the Blumhouse budget excuse for what ended up onscreen. He has to shoulder some blame for that, though I’ll stand by my belief that G.I Joe: Retaliation was a necessary and good course correction in his hands, for which he deserves a smidgeon of goodwill.

I’m happy for a Hasbro shared universe (which could of course include properties acquired from Kenner) to happen in somebody else’s hands, however, and here are the reasons why:

1. The Usual Versus Problem Is Not a Problem Here.

In a recent article on the upcoming Godzilla Vs. Kong, Steven Kelliher wrote that the “versus” movie “inevitably results in shoddy script work, glaring tonal shifts and uneven pacing as the same traits that lend such characters and creatures substance and reality in their respective domains clashes far more violently than any actual carnage between them when placed in each other’s company.” He’s not wrong – from Frankenstein Meets the Wolf Man to Aliens vs. Predator: Requiem, mash-up movies almost invariably turn campy.

The reason this wouldn’t be an issue for G.I. Joe vs. Transformers is that they’re both already campy. And before you start showing me that one IDW comic you have that takes Cobra seriously as terrorists, or the exhaustive guidebook that explains how society on Cybertron could actually function, let’s get real for a second: the major reason ANYONE here is a fan is because of the toy lines and cartoons of the ’80s, and those were full of cheap animation, bad fake accents and MASSIVE lapses in logic. We did not care, and there is nothing wrong with loving them, so long as you acknowledge they could be incredibly silly sometimes too. The problem fans have with Michael Bay isn’t that he doesn’t take things seriously, but that he makes them unserious in the wrong way, with jive-talking and dick jokes. If he instead utilized bad fake-Australian accents and conspicuously showed every single enemy pilot bailing out as their planes blow up (due to “laser” weapons that look like real military guns, somehow) he’d be right on track.

Make us a movie where a guy with a metal face teams up with a giant robot who can become a tiny handgun to defeat an American military that includes football players, pro-wrestlers, grenade-throwing ninjas and guys who wear their arctic gear in all climates, and I will totally pay to see it. Just like we all paid to see a gun-toting raccoon and his friend the one-track-minded tree take on a big purple space guy.

Jon Chu may have gone into the first Jem movie thinking about the sequel – the mid-credits tease makes that clear – but nobody else in the movie business is wanting one at this point. And that’s too bad, because they’re blaming a movie that was bad for many reasons that had nothing to do with it being about Jem. A studio executive might shoot back that many of the original fans hate the Transformers movies, and those do well anyway, and said person would be right. But even the most ardent detractor would admit that the Transformers movies actually contain robots that transform into vehicles, while the only “holograms” in Jem and the Holograms are of old home movies and Google Earth.

So Jem’s not getting a sequel of her own, but she could show up in another property’s film without being perceived as potentially detrimental to the plot or box office. Listen, if Marvel can have Howard the Duck make a cameo in their movie, no prior failure is too large. With music-themed Transformers like Soundwave among the fan-favorites, it’s no stretch to imagine a key role for a successful female record executive with a secret identity – and maybe Cybertronian technology can be what creates the hologram effects. Yes, that would be a bit of a retcon – but add a throwaway line like “This is what your father was trying to achieve, but we are centuries ahead and this is what we have done for you,” and you’re good. Then, if Jem the character in the Transformers crossover is well-received, her chances of getting another, rebooted movie improve.

Take a lesson from how Marvel responded when the first Hulk film was a disappointment. They brought him into the Marvel Cinematic Universe with a pseudo-sequel that kept the parts of the first movie they liked, and discarded the rest. Then when Edward Norton proved difficult to work with, they started over yet again with Avengers‘ Hulk, whose backstory may or may not still be in any way related to what we saw Norton’s Banner go through. What is certain is that Mark Ruffalo was the most popular Hulk, and he has stayed in the role, each time getting closer to what comic fans like about the character.

You could argue – and I do – that Jon M. Chu himself pulled the same trick with Zartan and Cobra Commander in G.I. Joe: Retaliation. What I think nobody would argue is that fans would be happy to see the cinematic Joe team and the Bayformers get a makeover that simply discards the stuff we criticized in previous movies, while keeping what we dug. Most importantly, no explanation necessary. It’s not like Michael Bay ever explains why the Autobot roster is totally different each movie, or where Shia LaBeouf’s character went to.