Note: All Blu-ray release dates are subject to change up until the very last minute. That’s why we reviewed Avengers 2 last week. 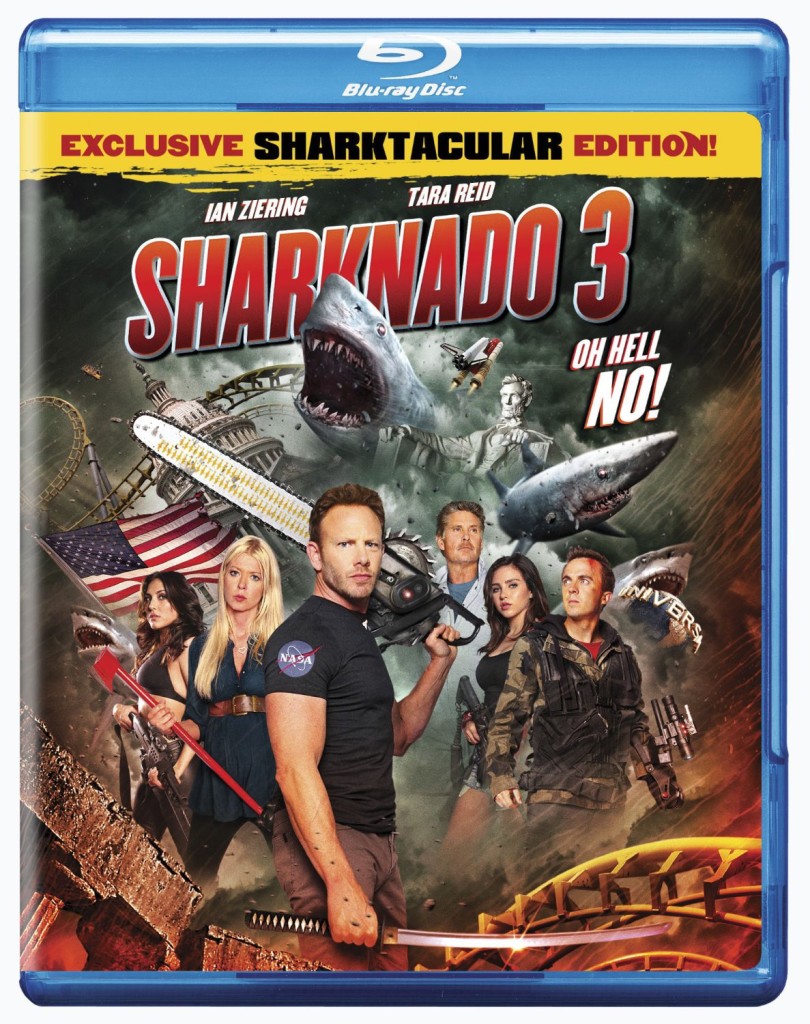 Sharknado 3: Oh Hell No! – You probably know full well what you’re getting here, but as our own Kyle LeClair might say about some new game, F***, if you can’t appreciate Ian Ziering wielding a chainsaw lightsaber while Tara Reid is giving birth inside the stomach of a vacuum-proof shark that is falling down to Florida from outer space, I just don’t want to live on the same planet as you any more. Extras include extended and deleted scenes, a cast and crew commentary, a featurette on the celebrity cameos from Chris Jericho to Ann Coulter, Archie vs. Sharknado details, alternate endings and more.

South Park: Season 18 – Randy as Lorde, Cartman Brah, Penis-Exploding Gluten, drones, transgender bathrooms, holograms, the Canadian Department of Mobile Gaming…yep, this was a pretty good season. Though the new one thus far is even better.

We Are Still Here – A nifty haunted house movie by director Ted Geoghegan, in which a nice couple moves into the new neighborhood without bothering to check out the history of their new domicile. What’s great about this is the way it combines several genres of indie horror in one – at first, you think it’s going to be an ultra-realistic ghost flick where the haunting is all in everybody’s mind, but just as you settle into that groove, the burnt zombies appear…and disappear. Then, once you think it’s now pegged as a monster movie, it goes full gorefest for its final act. My only minor complaint is that casting auteur Larry Fessenden in one of these films is like casting Mr. T in anything else – to the seasoned indie horror viewer, he is so distinctive and recognizable that “playing a character” doesn’t really work for him any more, since he seems unwilling to change his appearance.

American Horror Story: Freak Show/Vikings Season 3/Penny Dreadful Season 2/The Leftovers Season 1 – If you liked these shows, maybe you’ll want to buy them. I dunno. All I know is that that’s my friend Trista on the cover of AHS:FS, so I hope she gets royalties.

Tremors 5: Bloodlines – In which survivalist Burt Gummer (Michael Gross) travels to South Africa to fight an underground creature called an “Assblaster.” I think you may need to watch this for Gross’ sake, because what would he do, baby…without us? Sha la la la.

Francis Ford Coppola’s Bram Stoker’s Dracula: Supreme Cinema Series – Funny thing about this one: I LOVED it when it came out, despite Keanu Reeves’ terrible accent. As a fan of the book, I was happy to see every character included finally, and perhaps overly so. Years later I revisited it, and wondered how the hell anyone ever took it seriously: Keanu’s accent is but one symptom in a film where everything is so over the top it becomes painful in the wrong way. It’s almost a minor issue that anybody who thinks Dracula and Mina are a romantic couple is fundamentally misreading Bram Stoker to begin with; once you see the man-wolf humping Sadie Frost, you’ll realize that baffled laughter is the only legitimate response to Coppola’s visual histrionics. This edition comes with a new intro from Coppola, a clear case, and a 24-page booklet with rare photos.

Insidious: Chapter 3 – Disappointing sequel-that’s-a-prequel, in which a teenage girl is haunted by the spirit of a burnt man in a respirator who crawls through her walls at night. Psychic Lin Shaye comes to the rescue, since director/cowriter Leigh Whannell realized it was a mistake to kill her off last time, and so this installment is set earlier. Some of the atmospheric scares are quite good, but as with all prequels – especially of the horror variety – knowledge of who is definitely going to survive kills a fair bit of the tension.

Home Alone: Ultimate Collector’s Edition – All five movies (yes, there are five) in which a sadistic kid visits torturous horrors akin to those of Abu Ghraib upon the petty crooks who dare to try and break in to his house on Christmas. It helps to imagine these are all prequels to the Saw series.

Special Effects Collection – Vintage Willis O’Brien, Ray Harryhausen and magnified ants highlight monster classics Them!, Son of Kong, Mighty Joe Young and The Beast From 20,000 Fathoms. Each will also be available separately, but if you like one, you’ll probably like them all and might as well save on the collected set.

Horror Classics, Volume 1 – Hammer Films’ takes on The Mummy, Frankenstein Must Be Destroyed, Dracula Has Risen From the Grave and Taste the Blood of Dracula. Also available separately if you like, but one can never have too much Peter Cushing and Christopher Lee.

When Marnie Was There – What might have been Studio Ghibli’s last animated feature tells the story of a 12 year-old girl sent to the country for health reasons, where she meets a mysterious friend. I haven’t seen it, but no synopses seem to want to spoil more than that, so I assume TWEEEST!

Final Girl – Strange, Twin Peaks-inspired sorta-horror about a girl who is trained from birth to infiltrate and kill a gang of casual murderers. Abigail Breslin shines as the title character, but it’s more of a fun revenge pic than it is scary – imagine I Spit on Your Grave without the grotesque rape scene, and much weirder art direction.

Gravy – Psych‘s James Roday directs this slasher about a trio of costumed cannibals who capture the employees of a Mexican restaurant and plan to cook them one by one. While the kills are effectively staged, the lack of understandable motives behind why exactly the bad guys do what they do the way they do feels like a lack of thought on the filmmakers’ part, subsumed by a desire to simply deliver gore and smartass lines. Which, to be fair, it does. But man, the garishly colored sets and costumes are ugly.

Going Clear: Scientology and the Prison of Belief – Want to know how, exactly, L. Ron Hubbard’s science-fiction based “religion” differs from all other faiths you don’t care for? Documentarian Alex Gibney lays it all out, and friend-of-TRV Tony Ortega is heavily featured.

Burnt Offerings – 1976 haunted house flick with Burgess Meredith, Karen Black, Oliver Reed and Bette Davis. If the ghosts don’t get you, that cast’s emoting will.

There’s probably even more this week, but those are my top picks. Got anything to add?