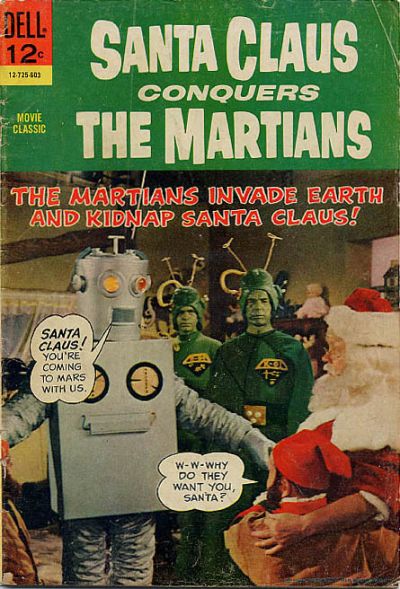 Time for round two of our rundown of notable denizens of the Fourth Rock From the Sun, in recognition of the success of The Martian over the weekend and the NASA announcements last week of water on the Ochre Planet. Yesterday’s selections took us everywhere from Danish silent film to American radio drama to British subway excavations.

Here are selections Ten to One…

The script of 1953’s Invaders From Mars probably isn’t much less silly than that of any other sci-fi film of the period, but the vivid color photography and the direction of William Cameron Menzies makes it one of the best of its kind. The director’s compositions chillingly isolate the boy-hero (Jimmy Hunt), who can’t get anybody to believe that he’s seen a flying saucer land behind his house, and that its crew is taking over the minds of the locals, including the kid’s parents. Eventually we see that the tall, mossy-green Martian mutants are in service of a swollen-brained little dude enclosed in a glass ball.

This movie is widely seen as having a Cold War subtext, but I think it’s really the timeless childhood fear that adults, even those closest to you, may not be trustworthy that made Invaders From Mars haunt the dreams of so many Boomer kids. Tobe Hooper remade it in 1986, and while his semi-spoof version has its moments, it’s a shadow of the original.

In the 1961 Twilight Zone episode “Will the Real Martian Please Stand Up?” a group of random people waiting in a diner for a bridge to reopen determine that one of their number is a Martian. Candidates include the likes of creepy, black-coated John Hoyt and blustering old crazy guy Jack Elam.

I won’t give away who it is here, although even when the Martian’s identity is revealed it’s not the final or best twist of the episode. I’ll just note that this is about as economical and stripped-down as alien invasions get, with the most admirably low-tech “special effects” imaginable.

This extremely low-budget 1967 effort from Texas filmmaker Larry Buchanan has likely gained its immortality more from its title than from any intrinsic entertainment merit. Tommy Kirk plays Dop, leader of the crew of hard-up Martian boys hoping to find some hot new talent. It’s a mostly tedious watch, but it should be said that Dop’s candidate is played by the seriously adorable, recently departed Yvonne Craig, the same year she played Batgirl on TV, and she truly seems worth planet-hopping for.

Lean, narrow-faced Paul Mantee, who probably should have become a bigger star than he did, had his finest hour onscreen in the lead of 1964’s Robinson Crusoe on Mars. Like Mark Watney in The Martian, Kit Draper was a Martian only reluctantly, being a stranded astronaut struggling to survive.

The first half of this quietly charming Byron Haskin-directed adventure, mostly shot in Death Valley, can lay some claim to scientific plausibility, at least by the standards of the time. The story takes a more fanciful turn in its second half, when, following Dafoe’s novel, Kit gets his Man Friday – Vic Lundin as an escaped alien slave. The cast is rounded out by a pre-Batman Adam West and a monkey.

The title character of 1958’s It! The Terror from Beyond Space is a hulking ogre who has stowed away aboard the return flight from Mars of an Earth ship. The scaly, fang-faced nightmare, a creation of the great ‘50s-era monster designer Paul Blaisdell, was played by former cowboy star Ray “Crash” Corrigan in his last movie role.

This grim space opera, scripted by the redoubtable Jerome Bixby of “It’s a Good Life” fame, bears a much-noted resemblance to Alien. At the end, we are sternly warned that “Another name for Mars is Death!”