One of the quirks that can befall an actor with a long career is that they may well be remembered mainly, or only, for the last roles they play. Neil Hamilton was a major leading man in silents and early talkies, but he’s now known almost entirely as Commissioner Gordon on the Batman TV series. Cliff Robertson won the Oscar for the title role in Charly, but the current generation is most likely to know him as Uncle Ben in Sam Raimi’s Spider-Man films.

This isn’t cause for a pity-party, of course, since most actors don’t get remembered at all. But there’s a special wrinkle in the case Michael Gough, who passed on in 2011 at the age of 94. The average moviegoer would be most likely to remember Gough as Alfred the Butler, opposite Michael Keaton, Val Kilmer and George Clooney in the Batman movies of the ’90s. He was seen, or heard, in other Tim Burton films; one of his last roles was the voice of the Dodo in 2011’s Alice in Wonderland. But even without his disproportionate association with Alfred, I’m not sure that Gough ever quite got his props.

His insanely prolific career in film, television and the stage – which included credits like Derek Jarman’s 1993 Wittgenstein (Gough played Bertrand Russell), the George C. Scott version of A Christmas Carol and even a Tony Award in 1979 for Alan Ayckbourn’s Bedroom Farce – also included a great many horror and sci-fi favorites beloved of nerds. It might not even be a distinction he would have much wanted, but he ought, I have long thought, to be placed in the pantheon as one of the all-time great horror-movie icons, up there with Karloff, Lugosi, Lee, Price, Cushing, Chaney, Carradine, Lorre, Atwill and so forth. Like each of those guys, he brought something to the genre that no one else did. 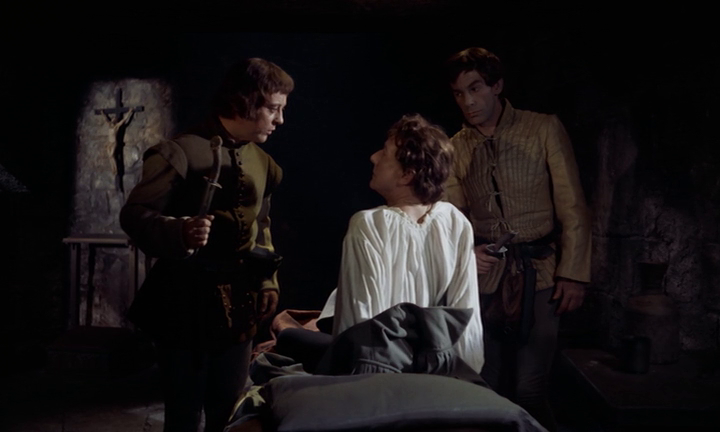 Even in this early role, before the horror genre proper had discovered him, Gough was doing horrific things in one of Shakespeare’s more gruesome dramas. The actor played the First Murderer, not the Second Murderer if you please but the First Murderer, in Laurence Olivier’s stately, star-studded 1955 film of Richard III. He and Second Murderer Michael Ripper drown Richard’s hapless brother George, Duke of Clarence (John Gielgud) in a “Malmsey-butt” (big-ass barrel of wine).

Gough is said to have landed the role by, essentially, whining: Bellyaching to fellow actors that Olivier was using big-time Brit classical players even in the smaller roles, and leaving no room for then relative unknowns like himself. This got back to Olivier, who called him, snarled at him for “stirring the shit,” then asked which of the Murderers he wanted to be. Gough picked the First, guessing that he would have more lines.

It was a good choice: Unlike the sullen and remorseful Second, the First is the chattier, more obsequious and more heartless of the two murderers. Shades of Gough’s horror parts…

Although Gough played important supporting roles in Hammer classics like 1958’s Horror of Dracula (as Arthur Holmwood) or the 1962 Phantom of the Opera, it wasn’t really at Hammer that he made his distinctive mark on horror. The Michael Gough persona truly emerged with the starring roles he had in three British films for the American writer-producer Herman Cohen: Horrors of the Black Museum (1959), Konga (1961) and Black Zoo (1963). In each of the three, he plays a bad man. A really bad man.

What gives most of the immortal horror stars their greatness is an element of humanity, of poignancy in their characterizations. It’s especially overt with Boris Karloff and Lon Chaney, Jr., but even when Lugosi or Christopher Lee played a deeply evil character like Dracula, they brought it tragic undertones and a certain dignity and grandeur.

Michael Gough didn’t go in for that crap. His horror protagonists were unadulterated shits: Cold-fish obsessives, petty, spiteful, sneeringly dismissive of others, driven by an almost Nietzschean megalomaniacal selfishness. About the only texture in his persona is his reptilian lustfulness.

There’s something exhilarating about these performances, not only because of the vicarious liberation it offers to our own worst selves, but also because it frees us from having to feel bad when he gets his inevitable comeuppance. He’s so vibrant and funny that he’s highly entertaining to watch, but you aren’t likely to feel the slightest pang at his destruction.

In Horrors of the Black Museum, Gough plays a true-crime writer who engineers a series of murders themed to artifacts in Scotland Yard’s notorious (and real) Black Museum of crime. Victims are beheaded, electrocuted, spiked in the eyeballs by trick binoculars and receive other grisly send-offs, all for no other apparent motive than to give Our Hero something to write about.

The most laughable, and probably the most enjoyable, of Gough’s films for Cohen (in addition to his three star vehicles, he also played a supporting jerk in 1970’s Trog), was Konga, a 1961 giant ape movie, with a side of carnivorous plants. Gough is Dr. Decker, a scientist who may safely be placed in the “mad” category, since he finds that when he injects a sweet little chimp with his special serum, the creature turns into a killer ape who can be dispatched on murderous errands. These include removing his rival for the attentions of the sexy young object of Decker’s lust.

The doc hasn’t counted, however, on the jealousy of his middle-aged assistant (Margo Johns) whose feelings for him he has contemptuously ignored, in the grand Michael Gough tradition. She gives Konga an overdose, after which he grows Kong-sized and rampages through the streets of London with the Doc in his palm. Brilliant actor though Gough could be, he was no Fay Wray.

By the way, despite his demise next to Big Ben at the end of movie (he promptly shrinks back down to a bullet-riddled chimp corpse), the title primate nonetheless lived on in an early-‘60s comic book series from Charlton, drawn by none other than Steve Ditko. Free from Dr. Decker’s bad influence, Konga had encounters with everything from dinosaurs to aliens. The series was republished in 2013 in one volume as part of IDW’s Ditko’s Monsters series. It’s a fun read.

Gough played yet another nasty sick-ass in Black Zoo, a too-little-known 1963 shocker co-written and produced, like Horrors of the Black Museum, by Herman Cohen. This time he’s the head of private menagerie who seems a sweet old zookeeper in public but is actually an organ-playing member of a freaky cult of animal-worshippers, able to use his vicious creatures as assassins against anybody who rubs him the wrong way.

Twisted as this movie, now available through Warner Archive, undeniably is, I’m not sure it can compete with 1933’s Murder at the Zoo, with Lionel Atwill as a goggle-eyed pervert zookeeper siccing animals on his enemies. Atwill even sews one guy’s mouth shut. Gough must have been envious.

Gough doesn’t show up until near the end of 1967’s They Came From Beyond Space (about 1:15:03 above), but it’s worth watching anyway. First of all, the movie, a British adaptation of Joseph J. Millard’s The Gods Hate Kansas, a novel almost as wonderful as its title, is rollicking silly fun. Second of all…Gough gets to play The Master of the Moon! He bites off his lines with all the imperious loftiness that exalted title would seem to demand.

He’s part of a race of aliens that have come to Earth (Britain here, rather than Kansas) and, as in It Came From Outer Space and many other yarns, possessed human bodies to help them build a spaceship that will get them off the Moon. Our hero Robert Hutton explains to Gough that all they had to do was ask us Earthlings nicely. That’s clearly against the Master’s principals, but [spoiler alert!]he grudgingly vacates the body he’s shanghaied, who turns out, in the movie’s final seconds, to be a pleasantly milquetoast fellow.