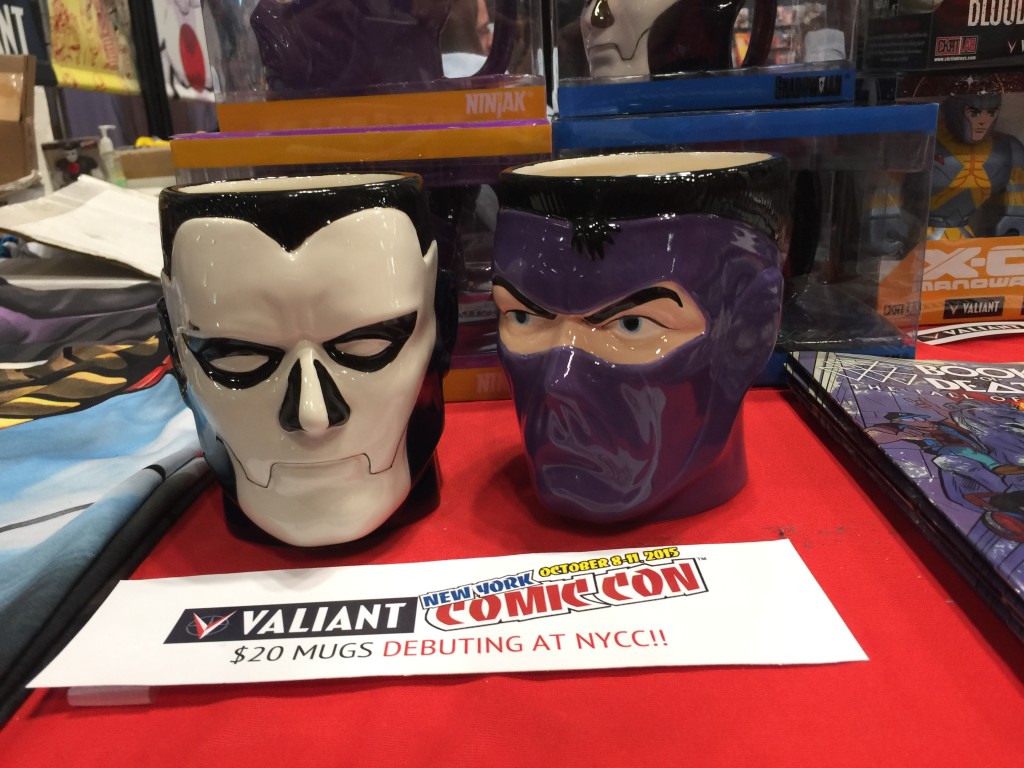 I’ve never left a comic book convention feeling that broken in my life. No shit, I’ve gone to all ten New York Comic Cons and spent at least six of them milling around with no real purpose. This one I actually had shit to do, and for some reason that shattered me. I might also be suffering from not being able to stumble home to my own bed at the end of the night, but what the hell? Sleeping on couches (the couches of some extremely generous friends, Alacashams and Chris. Thank you both again) used to not be a problem, either. But for some reason since getting back from NYC, I’ve been falling asleep every 45 minutes. Crap, what if narcolepsy is this year’s con crud?

This week in comics, we’ve got an intro to G.I. Joe, a survey of Peanuts, a remix of E.T., an end to a crossover, a beginning for a next generation at Marvel, Trevor Noah on a trampoline, an a dimension-spanning Where’s Waldo. But first…shit one of those might have been a dream. First! An end to a prelude. 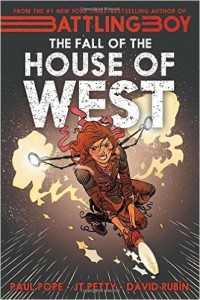 The Fall of the House of West (First Second Books)

It’s become more or less an annual event for me: every year at New York Comic Con, I pick up a copy of whatever the latest book from the Battling Boy series is, bring it home and tear through it in the first -bathroom trip-half hour I’m back. This year was no different. But rather than get home and rave about it, I’m feeling pretty conflicted about how it turned out. Spoilers, FYI. I’m going to try and be oblique about it, but if you’re going to read at all, just skip this whole next paragraph and we’ll talk in the comments when you’ve read it.

I’m not entirely certain that undercutting Haggard West’s abilities in order to make an emotional point was really worth it. I think the greatest problem with the story is that it was a prequel – knowing that chronologically, West dies pretty much 10 minutes after this story ends makes the realization that he (inadvertently) caused all this pain for a number of people, then couldn’t ever figure it out and was in fact manipulated into ignoring it took some of the oomph away from his character for me. Of course, the fact that Aurora discovers what he couldn’t and comes to terms with it accomplishes the probably intentional goal of making her look better than her father and oh crap that’s totally what Paul Pope, JT Petty and David Rubin were trying to do so I guess I should just shut up.

I love Rubin’s art: I think I said last year that his drawings are like a really good action artist had started his career cartooning for MAD, and his work here is as good or better than it was on The Rise of Aurora West. Petty and Pope seem to be sowing seeds of tragedy here (on top of some already fresh tragedy, of course), and my minor complaints that I just talked through aside, I love this series.

You can pick up The Fall of the House of West at your friendly local comic shop or online via Comixology. 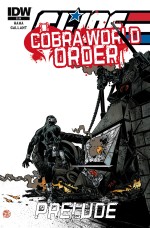 Continuing Paul Pope week at TRV is the prelude to the next big G.I. Joe event. (Pope does the cover).  If you’ve ever been interested in the G.I. Joe comics but were intimidated by the backstory or the size of the universe, this is the issue you should buy.

It’s a double-sized issue kicking off Cobra World Order where, presumably, Cobra takes over the world, but none of that really happens. The Joes new base gets inspected by the new Senator overseeing their funding source, and that gives Larry Hama and SL Gallant an excuse to go through a rundown of the history of pretty much every person, faction and classification on any of the like, four sides to the conflict. Revanche, Cobra, Crimson Guards, the Arashikage, the Joes three bases, even Storm Shadow’s relationship with the Joes all get explained. Personally, I found the issue really valuable, but mostly so I don’t go into the next book I review mystified. Though that might be fun for you guys.

You can pick up G.I. Joe: Cobra World Order Prelude at your friendly local comic shop or online via Comixology.

So I kind of alluded to this when I talked about Dean Haspiel’s new stuff in my con roundup, but I didn’t dig too far into it. A similar concept applies here, though. Charles Schultz’s Peanuts is one of the most influential comics of all time, a shared piece of culture that is instantly and universally recognizable not just in style but in tone. Boom this week puts out a jam book in his honor, and if you get the right talent, stuff like this is great – watching exceptionally talented people put artificial restrictions on themselves can be enormously entertaining. Haspiel has to alter his style and change his storytelling sensibilities to fit a vertical-scroll three-panel format on LINE Webtoon for his Red Hook book; here folks like Paul Pope, Stan Sakai, Shaenon Garrity or Roger Landridge aren’t trying to ape Schultz’s art style, but they are in many cases wrapping their own storytelling ability around Schultz’s intellectual sensibility and sense of humor. Or there are the stories like Molly Ostertag’s, Matt Groening’s and Hillary Price’s that use Peanuts trappings to talk about what the characters have meant to them over the years.

The book works wonderfully. I read through it once, then I would flip through the PDF to find stuff I wanted to specifically cite, and what strikes me is how everyone managed to pull the same shared images from Schultz’s work, but drew vastly different meanings and interpretations. Tribute books often run the risk of being trite or self absorbed on the part of the participating creators. That’s not the case here at all: this book is a heartfelt series of stories showing just how much, on a macro and a micro level, we all owe Peanuts today.

You can pick up Peanuts: A Tribute to Charles Schultz at your friendly local comic shop or online via Comixology. 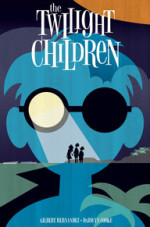 I feel like more people should be shouting about this comic. Gilbert Hernandez and Darwyn Cooke doing…E.T. is the uncharitable version of it, but it’s kind of E.T. Or at least Super 8. But who cares! Cooke could draw an all pinup issue of actual E.T. in ‘90s Marvel Swimsuit Issue bathing suits and it would look good.

Giving him Gilbert Hernandez writing about a group of kids from a Central American beach town who have to join forces with a couple of weirdo CIA agents to stop an alien invasion, that’s going to be really good. And I just realized that Dave Stewart is coloring it – Stewart is the guy who emerged from the absolutely stacked Best Colorist field for an Eisner. I really can’t wait to get my hands on this.

You can pick up The Twilight Children #1 at your friendly local comic shop or online via Comixology. 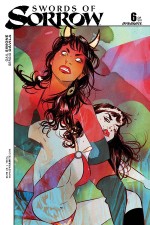 In a crossover between Purgatori and the women of Chaos Comics with Vampirella and the rest of Dynamite’s stable, the nerdiest thing here might be the submission hold that Purgatori put Vampi in on Tula Lotay’s cover, and I love it. Seriously, she’s a hell of an artist.

Other than that, this final issue of Dynamite’s big everybody fights crossover sees…surprise surprise, everybody fighting. It’s a lot of fun: Sergio Davila draws action very well, whether it’s a Red Sonja swordfight or Pantha slicing people up, or Deejah Thoris shooting evil demons out of the sky. It’s not going to change the world, but it’s a fun end to a ridiculous crossover that had no business being remotely good, and ended up very solid thanks in large part to Gail Simone and the rest of the great talent working on the tie ins.

You can pick up Swords of Sorrow #6 at your friendly local comic shop or online via Comixology. 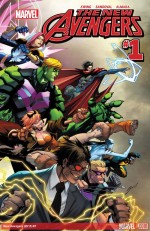 I talked a little about this in the NYCC roundup, but Al Ewing is a big part of why I feel good about the post-Secret Wars Marvel line. Ultimates looks incredible, but the hook for New Avengers might be my favorite: following up on Jonathan Hickman’s “Sunspot Buys AIM” story, it’s got Bobby, who brings together Hawkeye, Songbird and a stack of second generation heroes, running Avengers Idea Mechanics.

You can pick up New Avengers #1 at your friendly local comic shop or online via Comixology. 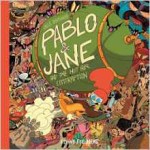 Jose Domingo, most recently of Island fame, has a new book hitting shelves this week that’s half Where’s Waldo kids book, half all-ages graphic novel, and all fun. Pablo and Jane are two bored kids living in London who have explored all the spooky areas in town except for the one haunted house on top of a hill. So they go, and they find a mad scientist mouse and cat pair: the cat uses the machinery in the house to send them on a chase through multiple different dimensions. The chase scenes are dense, bright, gorgeous Where’s Waldo style pages where the reader has to find pieces of the missing hot air contraption to help Pablo and Jane get home.

I never realized before reading this how much old video game design owed to children’s books, nor how much picture books have been influenced by video game design. But the pages where Pablo and Jane walk into the lab are basically a big Zelda map, and I felt myself subconsciously pushing right on a nonexistent controller when I turned to it. Domingo’s art is awesome but occasionally too dense, going from energetic to cluttered on storytelling pages a couple of times. But that’s kind of moot: the book is a lot of fun and right in the wheelhouse of like, your friend’s precocious six year old. Shit, I’m gonna have a gift guide to write soon…

You can pick up Pablo & Jane and the Hot Air Contraption at your friendly local comic shop.

No look back again this week because there are too many good books out now! That’s what I’m reading this week. Were you at NYCC last weekend? What did you bring home with you? What are you picking up from the shop today?