While not quite the full-on head trip we’ve come to associate with writer/co-director Charlie Kaufman (Synecdoche, New York; the screenplays for Eternal Sunshine of the Spotless Mind and Being John  Malkovich), Anomalisa is unmistakably the same voice, using new techniques and a smaller focus to illuminate the way a lonely writer can subjectively see the world.

You might ask why a movie that, on the surface, is merely about a lonely man connecting with a lonely woman while on a business trip should be told in stop-motion animation. The first, most obvious part of that answer is that in merely depicting (as it does) certain acts that most every adult has performed in a hotel room, as naturally as possible, it would instantly get an NC-17 rating in live-action. But there are more artistic reasons as well. To capture the way author and customer-service expert Michael Stone (David Thewlis) sees the world, every other puppet is given the same face…and the same voice (that of Tom Noonan, who occasionally seems to be channeling Jimmy Fallon). Every other puppet, that is, except Lisa (Jennifer Jason Leigh), one of two fans of Stone’s work whom he meets in his hotel.

[Yes, I am aware that there is some debate in puppetry circles as to whether stop-motion characters count as such. Let us not be that pedantic here.]

Both Lisa and Michael see themselves as lonely and lost in many ways, and in recognizing each other as the only people in this world who do not look alike, they share a moment of beauty. But the insecurities can only be held at bay for so long, and Stone’s dark worldview quickly tries to start seeping back in, as fears become literalized and nightmares indistinguishable from truth.

Unlike the world of The Lobster, Kaufman’s allegorical universes are very pointed and focused – every metaphor is clear, every departure from reality connected to a specific neurosis. Without that, and without the animation, this could be some low-budget Richard Linklater experiment, but in its reduction to generics, Kaufman and codirector Duke Johnson (Moral Orel) have made something far more universal. 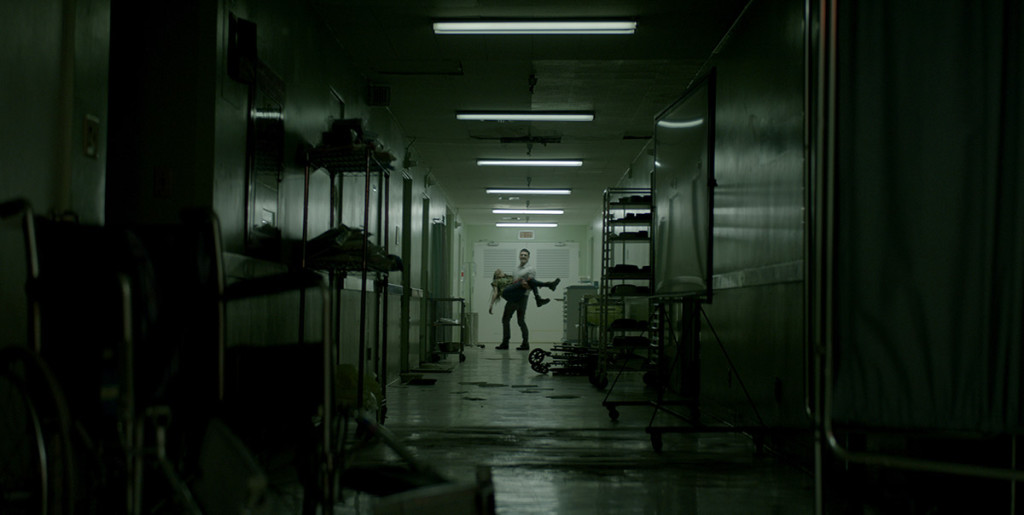 There are monsters in Southbound that are among the best I’ve seen onscreen in a long time – floating demons that look almost like charred palm fronds in the wind from a distance, but reveal themselves as they drift closer to be more like mummified Harry Potter Dementors, as redrawn by Mexican Day of the Dead folk artists. These demons haunt the first segment of what unfolds as an anthology of tales loosely connected by a nowhere town somewhere in the desert that is, as Slayer might say, South of Heaven. (The local ice cream parlor is named “Freez’n Over.”)

The rules of the town/area are never made quite clear, and may make the viewer wish for a longer feature with just one story that explained a bit more – though there’s something to be said for leaving people wanting. At its best, in a segment that involves an unfortunate motorist being talked through delivering an amateur tracheotomy over the phone, Southbound delivers a visceral, skin-crawling quality that dares you to keep watching. Less successful is a rather obvious home invasion bit that plays like a rehash of The Strangers.

At 89 minutes, however, it’s an experience in which you’ll likely never be bored, and there’s just a chance you’ll be amused, horrified, revolted and thrilled before all is said and done. Larry Fessenden anchors the whole thing as a Rod Serling-like voice overheard on the car radio, and it’s the perfect role for him.

I’d love to tell you that this is a gritty, Creed-style sequel to Big, in which Josh’s kid comes to terms with being the same mental age as his dad, but that is not actually the case. Instead, it’s a seriously dark number from Turkey, and this horror flick takes several tonal and narrative turns before deciding to simply pummel the hell out of you (or into you, perhaps). It begins as a child’s nightmare – a boy hears his parents having sex, and is menaced by a creepy looking hand – then proceeds to a quartet of corrupt cops in a diner, bullshitting Pulp Fiction-style about having sex with animals. Eventually – and after a few hallucinations involving hooded figures – they head out on a call to a particularly strange area of the back country, crash their van, and stuff starts to get weird.

You may also leave wondering what director Can Evrenol has against frogs.

7. Where to Invade Next

Okay, so I’m being a little cheeky by calling Michael Moore’s latest film “fantasy” – but it’s not entirely inappropriate – for once, he admits upfront that he is “picking flowers, not weeds” and looking for positivity rather than his usual tactic of making a film about something he doesn’t like. The gimmick here is that, armed with a U.S. flag for cheesy photo ops, he is going to “invade” friendly countries and steal their best ideas, all while dreaming of a world in which the United States – or any country, really – could possibly adopt ALL of them.

At first, most of what he discovers comes down to some variation of “more free time,” with countries that provide more vacation days and less stressful environments seeing good long-term results in citizens’ health and productivity. (As you’d imagine, he feigns mock indignation as he jokingly finger-wags and tells locals they’re supposed to be exploited.) Later, more serious issues like incarceration and the drug war are tackled, and the viewer learns that if one is planning a murder, it is probably best committed in Norway.

It’s easy to make fun – Moore’s mild self-mockery invites it further, and he can’t resist a few negative cheap shots towards the U.S. (he takes for granted that you’re already with him on the notion that the American drug war is literally and consciously an extension of slavery, and proceeds from there). Yet it’s also eye-opening and sad to see that something as self-evident as “happy worker = productive worker” or “rehabilitation beats revenge” is such a radical notion that we, and Moore, stare upon them like novelties as they actually work in other countries. He never quite gets around to saying HOW we can incorporate all these ideas, but his final thesis is that, in fact, all of them originated in America, and the other nations all thought they were copying us. It’s a nice irony that appears to portend a more optimistic Moore.