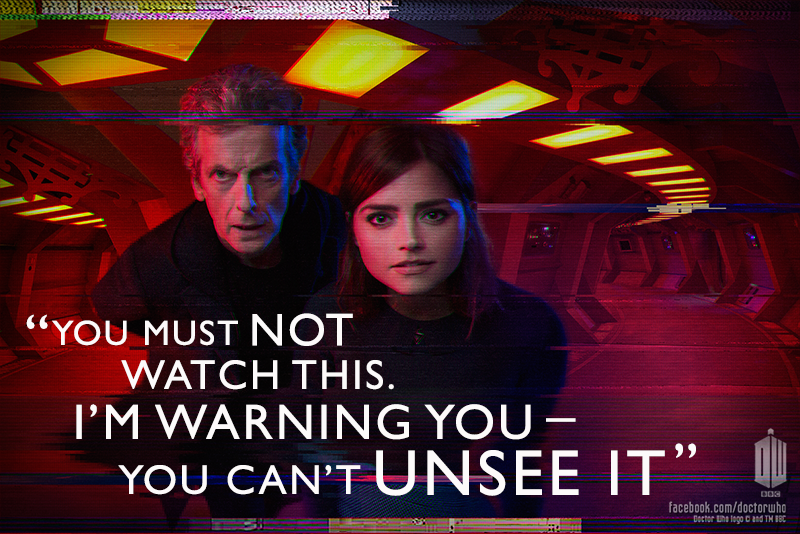 One, two, Moffat’s coming for you

Three, four, his rip-offs are a bore

The episode begins by telling you that you shouldn’t watch it. The fan consensus afterward appears to be that this warning was absolutely correct.

To be fair, my wife found this week’s Doctor Who consistently thrilling and scary, but I should also point out that she is 26 years old and has never seen Aliens. For a viewer my age – and admittedly, that might not be part of the calculus – you have to bring your A-game if you’re going to do “space soldiers running around darkened corridors hunting for monsters.” For kids, who are presumably the target audience, I can imagine it being creepy as hell to tell them that they have to go to bed and get a good night’s sleep lest their eye mucus turns into giant monsters – and that face dissolving at the end was seriously creepy. But what was the point? The distinct implication one comes away with is that much of what we saw was made up, and didn’t happen – so it didn’t just use an annoying found-footage gimmick, but it then subtracted the main thing that makes said gimmick appealing to begin with.

Doing away with even typical opening credits to further the gimmick that you’re watching a transmission, this week saw a mad scientist directly addressing the camera, warning you about what you will be seeing. On a space station in the 38th century, sleep pods that condense a regular sleep cycle into a few minutes (good Lord, but I could use one of those) are somehow creating excessive intelligent eye mucus as a side effect, and it’s forming larger humanoid monsters. This gives the Doctor ample time to lecture us about the importance of sleep (dude, you don’t have to tell me – I run a website) and rail against exploiting people for too much work. I grant you, this takes less time than watching Michael Moore’s new movie on the same topic.

The first-person camerawork is supposed to provide one of the episode’s Big Twists, but since the final Big Twist is that everything we’ve seen might not have been real, what’s the point? It also involves the Doctor being a real dick as he forces his companions (and the audience) to try and figure out something he has clearly already deduced, even as time is of the essence.

This season is supposed to be all two-parters, but next week’s preview looks a real head-scratcher, featuring a new character with a weird tattoo, and what appear to be reused sets from Harry Potter’s Diagon Alley. There is a brief cloud of CG dust that could be related to this week’s sandmen, but otherwise it looks utterly unrelated. Either it’s all a dream or this was, and I’m not sure which is more annoying. If Clara wakes up in a Morpheus pod at the end, marking the eleventy millionth time Clara has experienced something that felt real but was actually fake, I will be…not pissed, exactly. More like bored.