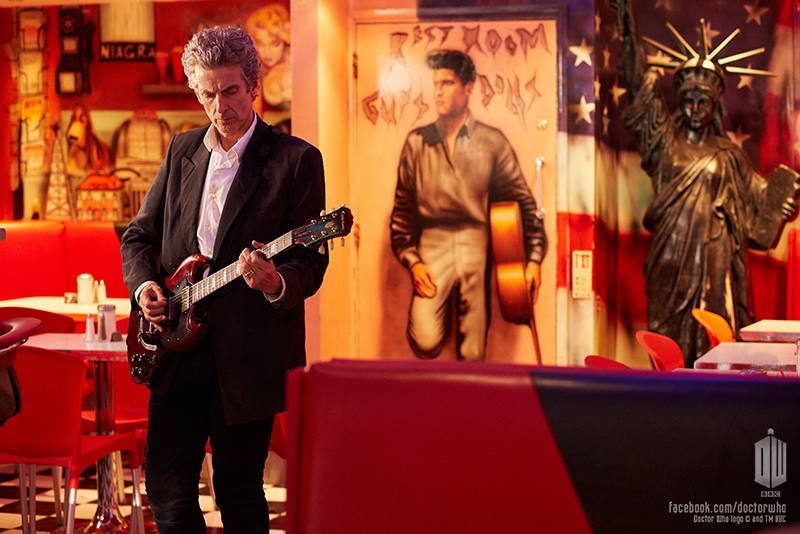 Well, I did at least partially expect they’d undo Clara’s death. I’m still a little shocked that it was so brazen, but not entirely surprised that it would be somewhat revealed upfront in order to make the viewer feel clever when all the pieces come together.

I confess I’ve missed a thing or two – Rassilon being alive again as leader of the Time Lords is a new one on me, and I chalk that up to the gap in my having BBC America and not. For an all-powerful immortal, he’s not that smart.

And I don’t understand the apparent Time Lord practice of housing children in vintage-style barns outside their futuristic cities. I know it was established, but it’s odd still.

So…the Doctor returns to Gallifrey near the end of time, as they worry about “the hybrid,” which turns out to be nothing like anyone predicted, or even the most obvious red herring of ME a.k.a. Ashildr. No – the “hybrid” is the Doctor and Clara working together as one. Ermmmm…hold on a sec.

Look, I think it’s clever to retcon the entire history of a 50+ year old-show, but it is also (a) a gimmick and (b) a bit of an ego-trip to show what a smarty-pants you are, Mr. Moffat. I was happy with the Doctor’s origin as a guy who left Gallifrey to fuck around because Time Lords are too stuffy. But now…he left Gallifrey because he saw a prophecy that he himself would doom the universe when bonded to a certain companion, and he strove to avoid that and in doing so ended up bringing it about?

Listen – since I’ve been married, I have appreciated more and more the conceit of Greek tragedy which says that in trying to avoid the horrible predestined thing, you will bring it about inevitably. Many of those playwrights may have been gay, but they understood domestic couple fights intimately. The Doctor and Clara are not married, however, and Clara should not be the one companion that could drive him to this. Hell, his own granddaughter was his first companion, and you’d think they’d have a more intimate bond. Yes, Clara jumped into his timestream to be an unseen part of his entire history, but is that a bigger deal than River Song marrying him?

Fanboy whining aside, I can accept it. In the here and now, she is the most important, just like how the movies I’ve most recently seen feel like the best. And I like the acting involved in the climax, even if I don’t entirely like that said climax was mostly talk.

And then Clara goes off to have adventures with the woman who lured her to her death? Seriously? They’re just best buds now? And WTF is up with chameleon circuits messing up? And if the Doctor is supposedto forget Clara so no Time Lord can find her, isn’t knowing her name still a bad idea?

LOVED the vintage TARDIS interior, though. Can we please keep it? Happy to see a new sonic screwdriver, too, however convenient the hand-wavey reason,

The whole theme of the season was the Doctor expecting to die every episode. If we’re done with that, good. I’m sure Clara will be back in some form, which is a cheat, but fine – cheat in favor of Donna Noble and I’ll forgive it. Maisie Williams already looks older than in her earlier-in-the-season episode, so having her as an immortal won’t cut it much longer. And while we’re on the topic of her, is she really going to be that excited by time-travel now, having lived to the end of the universe and presumably left Earth a while back?

Oh, and it could it be more obvious we’re setting up for the next Doctor to be female? Hell, maybe Maisie Williams can do it, since it would remind the Doctor that he/she saves people, yet again.

The diner as TARDIS? Sapphire and Steel did it. Look that up if you miss the reference. You’ll thank me.

In two weeks: The Doctor is apparently jealous to find that River Song married Baymax first.