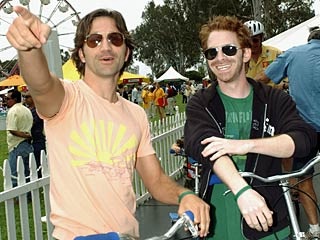 Entertainment Weekly is reporting that Robot Chicken‘s Seth Green and Breckin Meyer (he writes and does about half the voices on the show) will be joining Heroes as…wait for it…comic book nerds who “advise one of the Heroes.” A lot of people took me to task for my negativity after that third season preview came out last month, but man, this sounds like a terrible idea. Not that I have any problem with Green or Meyer?chances are they’re very good bets to play nerds who are even remotely interesting?but if they’re mentoring a Hero, then it’s probably a new Hero, and then this will inevitably turn out to be yet another sub-plot that’s a total waste of time. Maybe it’ll be a regular Hero like Parkman, which might be okay if it’s tied into the main plot. But man, I hope it’s not Claire, since we already know how Hayden Panetierre feels about these people.