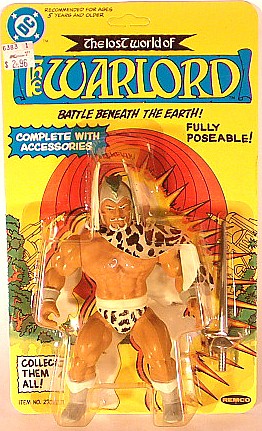 The 1980s were a magical time. Leg warmers came into fashion, a young Markie Post stole our hearts on Night Court [or in some cases, Richard Moll. -Rob] and in the toy world, everybody was putting down their laser blasters and now embracing the sword. With science fiction flicks getting swept under the rug by the sudden popularity of fantasy movies, everybody on the toy aisle seemed to wearing a loincloth in the 1980s. Here are the 10 most fantastic fantasy toylines from that decade. 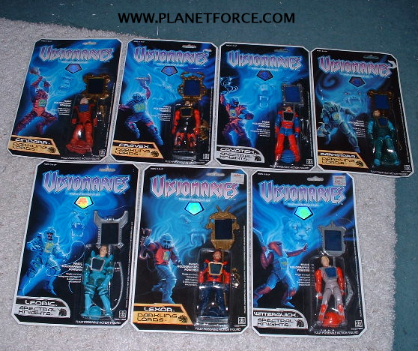 Hasbro?s offering in the fantasy realm had a unique claim to fame in that each figure had a hologram on his chest which displayed his power (hey, it was pretty special back in the ’80s). These powers were all animals, which the Visionaries could transform into, having been granted the power by the wizard Merklynn?a stupid name, but no more so than making the main villain’s animal totem be a mollusk. The resulting toyline was nicely designed, but the whole fantasy juggernaut had run out of steam by 1987, and the Visionaries were cut from Hasbro?s roster after only one wave and a 13 episodes cartoon. 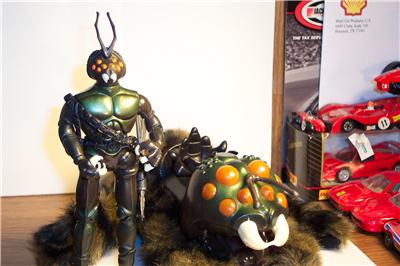 Coleco?s kick at the can in the fantasy world was a novel concept, taking place on the planet Symbion, where insects evolved into the dominant species. As is so often the case, one set of bugs was good, and one was evil. Specifically, the heroic Prince Dargon uses his giant bugs to try to stop the evil Empress Devora and her giant bugs, from taking control of the Hyves for some reason or another. All the humans on Symbion had insect-like features and powers?because evolution tend to rub off?but the figures were just okay; what made Sectaurs cool were the giant bug/vehicles, which were actually hand-puppets. Sectaurs only lasted one wave, but their hideous giant bug toys will live in our memories forever. 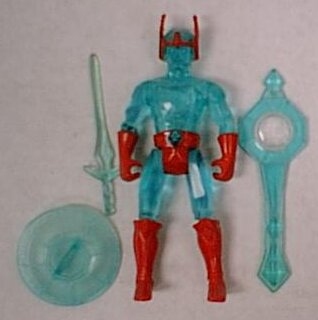 Marvel Comics wanted in on the fantasy toy/cartoon love, and decided to make Crystar. While they had several amazing writers and artists on staff, for some reason, only the Marvel marketing department was involved in dreaming up the franchise. They ended up with the brothers Crystar and Moltar who allied with wizard of Order and Chaos, respectively, and were turned into crystal and molten lava, also respectively (and very fortunately, as it would have seriously been awkward if Crystar was lava and Moltar crystal. very confusing). Having been handed this assignment, the Marvel guys tried to flesh it out as best they could, but Remco’s toyline came out before the comic and despite a nice Tron vibe to them, didn’t go very far. The comic was mercifully killed after an inexpilcable guest appearance by Alpha Flight.

7) Dragonriders of the Styx 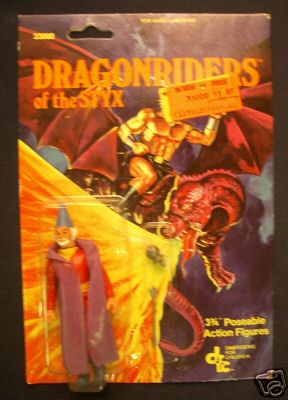 Dragonriders of the Styx were a virtually unknown series of 3?-inch style figures from DFC with fun little fantasy themes. There was little no back story, and none needed?there were simply good guys, bad guys and dragons for them to ride. Bliss! The figures were well-articulated, and included ogres, demons, warriors, knights, wizards (with requisite pointy hats) and crazy dragons, demons and assorted fantasy creatures to fly around on. It was the closest thing folks had to a Lord of the Rings toyline for more than 15 years. 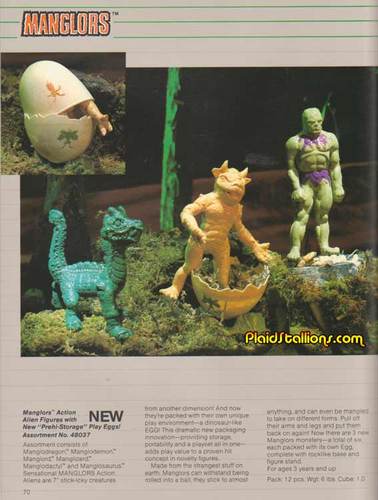 You probably don’t remember Manglors unless you were one of the few kids who had ’em. These monsters were made of some amazing stretchy rubber that not only allowed you to wad the figures into a ball, tie them into knots, or twist them until you thought they’d surely rip apart…and return right back into their original form. But the amazing part was that even if you did rip a limb or head off, you could put it back on. Seriously. It stayed. I don’t know why the government didn’t seize the technology from Ideal Toys, because it was amazing. Alas, the downside of the material is that it smelled horrible and was sticky, so if you dropped it once, it was covered in carper fiber and doghair, then and forever. FYI, IKen Kelly (who did the artwork for the good KISS albums) did the fantasy art packaging, which anyone would be proud to have on the side of your van.

5) Lost World of the Warlord

Based on the cool DC comic series, Remco (who was obsessively mining DC?s B-list titles during this time) created a line to stand next to He-Man, and hopefully trick lazy parents and slow children that they were also Masters of the Universe. The figures had the same bulked-up, squat bodies of MotU figures, but without the cool action features. Their claim to fame was including other DC characters such as Hercules, Deimos, Machiste and Arak, which resulted in poor sales. That should be of no surprise, most of these guys starred in comics you could get your letter printed in, guaranteed. Sadly, Remco announced the addition of Thundarr the Barbarian to this line in 1984, only to shelve the release. 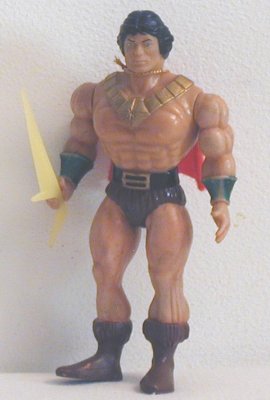 Filmation launched the Blackstar cartoon in 1981 but it wasn?t until the success of Masters of the Universe did Galoob spawn a series of figures. Blackstar was almost seems like an early version of MOTU, it being the story of an astronaut trapped on the planet Sagar (full of sorcerers and Amazons and priestesses, natch) who possesses a mystical sword. Galoob put a king-sized effort into the line, including figures that sparked which shockingly failed to capsize MOTU. It?s such a nice line that you can forgive the copyright infringing and vomit-inducing ?Trobbits?. 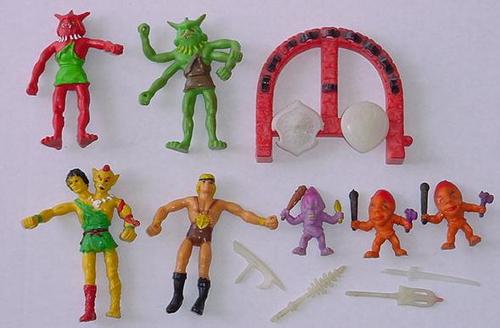 Arco released this fun little line of bendable figures with little to no fanfare throughout the early to mid-’80s, mostly to bargain stores. Despite their lack of an animated series or a comic book, the Other World figures made up for it with an amazing amount of characters, all of which were fun and imaginatively designed. Other World is highly collectible today as a result.

LJN took the big plunge and went after the Gygax estate with this great line of toys. While some of the characters made appearances on the animated series, the two were largely unrelated. Which is really too bad, as the figures are well-made with a colorful cast of cool characters, running the AD&D gamut?warriors, fighters, dwarves, mages, rangers, clerics, elves, orcs, etc. And that’s not to mention the many monsters and playsets, especially the Fortress of Fangs, with its plethora of traps including a spiked wall. It?s likely the lines sales might have been hurt by having a name tied to something the religious right were so certain caused satanism. Thank goodness we live in more enlightened time and don?t have people protesting books featuring fictitious wizards today.

1) Masters of the Universe

The chairman of the board when it came to loincloth heroes, the success of Masters of the Universe is the reason there are nine other figure lines to even add to this list. Although they mixed their sorcery with science fiction, MOTU originated at Mattel when the concept of licensing the movie ?Conan? was brought up. The idea was rejected when they decided that toys based on an R Movie wouldn?t fly (kind of funny when you visit any Toys R Us now) and Mattel chose to make their own homegrown hero. The toyline worked partially because of its insanely varied and highly imaginative cast of characters?the buff He-Man, skull-faced Skeletor, half-cyborg (maybe?) Trap-Jaw, birdman Stratos, etc.?and also because each figures has its own unique action feature, from firing caps to internal gears to spraying water to punching. Never before and never again has a pageboy haircut so rocked the world.