There have been many, many action figures made of actors and actresses based on the character they play in a movie or television series. Some action figures simply happen to look like various real people by accident. And then some lucky few receive the highest honor in geekdom–to be honored with an action figure of themselves, or have their likeness used for an action figure in an existing line. Here’s TR’s rundown of the top ten action figures based on real people, although we’re not counting sports or wrestling figures, unless those sports players or wrestlers have joined some fictional crime-fighting organization. Why?  Because…well, mainly
because we’re nerds and those toys don’t appeal to us as much. 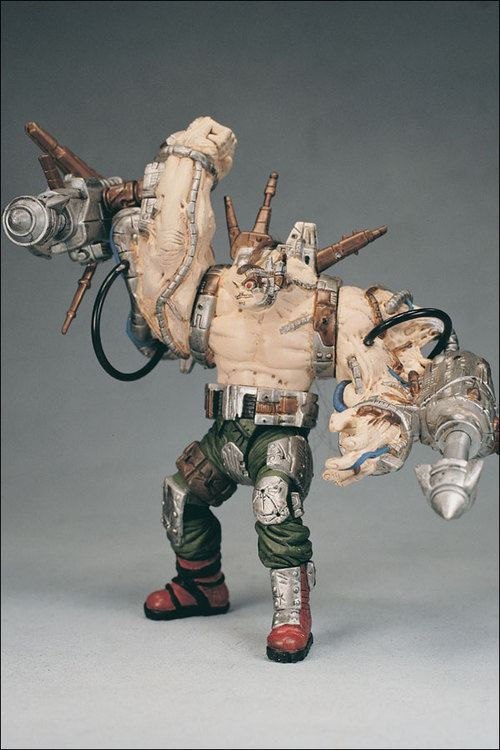 Many action figure collectors are familiar with the Four Horsemen, a design studio composed of four former McFarlane Toys sculpted who struck out on their own in the late 1990s and have become famous in an industry which has few celebrities. But during their McFarlane days, one of the Horsemen–Eric “Cornboy” Mayse–was immortalized in plastic via the Cornboy action figure in McFarlane’s bizarre “Total Chaos” series. You can tell it’s Cornboy by the goatee and the Borg-like robotic eye. Tacos sold separately. 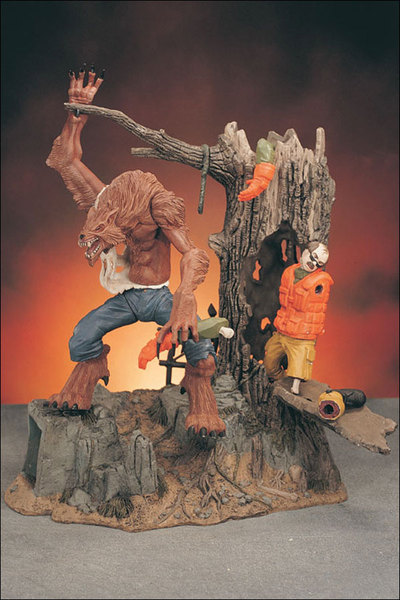 The Horsemen strike again. This time, they sculpted Steve Hamady, operations manager for McFarlane, as a hapless hunter who runs afoul of a lycanthrope in the McFarlane’s Monsters Werewolf playset. Hamady later became known on the web as “Steve the Victim.” The figure featured removable limbs, complete with bloody bones sticking out. Not sure what that means regarding the Horsemen’s feelings toward Steve.

As you can probably tell by the twee-yet-unpronounceable name, this figure is a creation of George Lucas. More specifically, it is George Lucas. Can you honestly expect a man as egomaniacal as Mr. Lucas not to create an action figure of himself? In order to save money on a new mold, Jorg was just your basic X-Wing pilot with the scruffy head of the Star Wars creator. Available only as an exclusive at the 2002 Star Wars: Celebration 2 Convention, the figure is surprisingly affordable on the second market, if my cursory eBay search is to be believed. The bio on his card notes that Jorg “entertained the pilots in his command by telling stories set long ago, in far-off galaxies”–presumably about teenagers cruising around town in a Chevy Impala listening to Wolfman Jack. 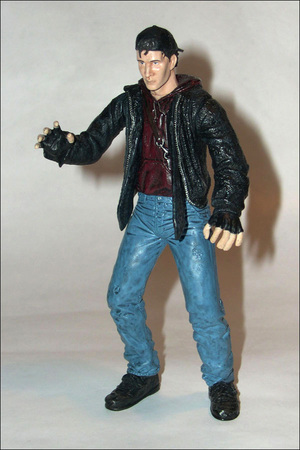 What was that about egomaniacs creating action figures of themselves? Todd McFarlane, artist, toy manufacturer, and ball enthusiast, had a cameo as a hobo in the 1997 film adaptation of his creator-owned Spawn comic. Naturally, he had to make a figure of himself as “Todd the Bum” as part of the Spawn Alley playset. Later, he released the figure in a larger scale as “Todd the Artist.” No word on when we’ll get a “Todd the Ball Enthusiast” figure, but you can always just put a couple of balls in his hands. 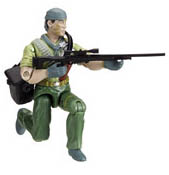 One of the best-known bits of trivia about G.I. Joe is that the likeness of Tunnel Rat, the Joes’ go-to man for claustrophobic situations, was based on writer Larry Hama. In the 1980s, Hama’s writing on Marvel Comics’ G.I. Joe series was so good, it reportedly outsold Marvel’s superhero titles at one point. Hama started writing the comic in 1982, and his face was bestowed upon Tunnel Rat in 1987. Like many popular Joe characters, Tunnel Rat was released several times.

While lots of pro wrestlers have had wrestling-based action figures, only a few have crossed into other franchises. In the mid-1980s, Hasbro made an attempt to appeal to a wider audience by bringing in someone from the red-hot world of professional wrestling into their G.I. Joe line. Enter Sgt. Slaughter, whose Joe filecard states “Let’s face it, the man be rough and he take no guff.” Slaughter even got to be in the Joe comics and cartoons. Initially available only as a mail-away figure, the good Sergeant became one of the most popular Joe figures ever. Hasbro stopped producing his figure in 1990, allegedly due to a WWF storyline that portrayed the “real” Sgt. Slaughter as a bad guy and an Iraqi sympathizer.

While his character’s name on The A-Team was B.A. Baracus, it’s a sure bet that when anyone describing a scene from the show had to name him, they called him “Mr. T.” That’s because in the ’80s, Mr. T was more famous than his character or even the show. Galoob got the rights to make ?A-Team toys, and their 12-inch B.A. Baracus figure was clearly based on the character, right down to the mechanic’s tools he came with. But the packaging didn’t say “B.A. Baracus”–in fact, sometimes the packaging didn’t have the phrase “A-Team” at all. And why? Because while there were probably some kids who were fans of The A-Team, all kids loved Mr. T. Want proof? 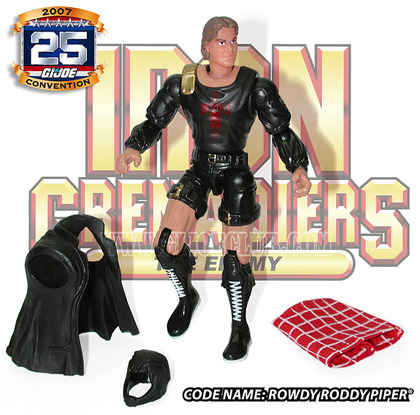 “Rowdy” Roddy Piper–pro wrestling extraordinaire, former boxing opponent of Mr. T and star of the soon-to-be-unnecessarily-remade They Live–has had plenty of wrestling-based action figures, but it wasn’t until last year that Piper joined Sgt. Slaughter in the ranks of G.I. Joe (or rather Cobra, since Piper was made into an Iron Grenadier). An exclusive at JoeCon 2007, Piper came with his signature kilt and leather vest. According to his filecard, he was a cousin of Destro, too. Wacky! 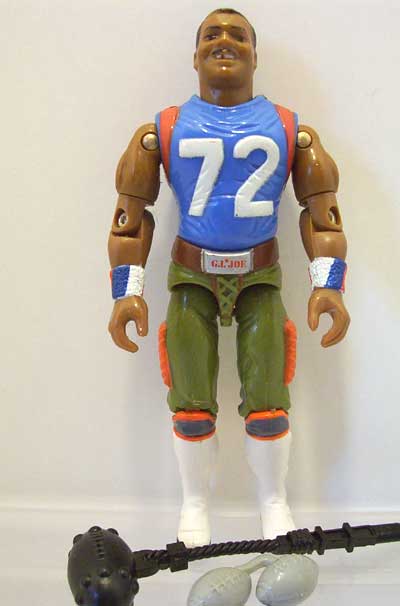 Unlike Sgt. Slaughter, Rowdy Roddy Piper or arguably even Mr. T, William “The Fridge” Perry didn’t have any sort of alternate celebrity persona; he was an NFL defensive tackle who helped the Bears crush the Patriots in Super Bowl XX. One of the most popular players of his era and a willing participant in the “Super Bowl Shuffle,” P
erry is best remembered by toy fans for his 1986 G.I. Joe: RAH figure. Described on his filecard as the Joes’ physical training instructor, Perry was nonetheless given a weapon: the infamous “football on a chain” accessory. 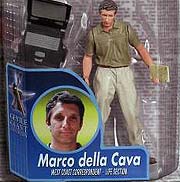 Who the hell is Marco della Cava, you may ask? He’s the incredibly lucky bastard who wrote an article for USA Today in 2001 about Gentle Giant’s Realscan technology. For the article, GG scanned della Cava and made a one-of-a-kind action figure of him, complete with packaging and accessories. The result was an incredibly high-quality product, free of charge (well, maybe USA Today picked up the tab). While most toy collectors would treat such a thing the same way they would a priceless golden urn filled with their beloved grandparent’s ashes, della Cava writes that his figure is “destined to be a plaything for my 5-month-old son, Nicholas, and maybe his kid beyond that.” Giving an action figure to a kid? Blasphemy