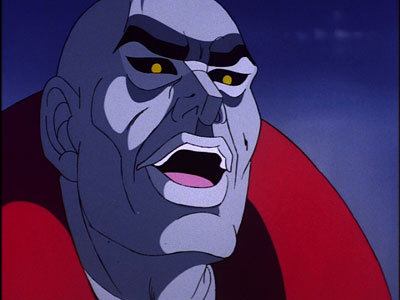 My inside source has struck again! This time, he’s got me the first pic eve (that I know of) of G.I. Joe: Rise of Cobra‘s Destro in his mask. Now, we saw the figure of masked Destro yesterday, or rather, those who were willing to be spoiled did, and it looked pretty good. TR commenter ZeroCorpse guessed that the metal mask would be all CG, and he wins the prize of being right… on the internet… on a small nerd site (congrats). Hit the jump to see Big D for yourself.

UPDATE: Paramount made me take the Destro screencap down, so it appears to have been real. If you missed it, I stand by my comment that it looks very CG, but it’s still accurate to the toy/cartoon, which I appreciate. Plus, the CG work might not be finished yet. Rest assured you’ll likely be okay with masked Destro when you finally see him.

Now, before you freak out, remember this is a small, lo-res screencap of what appears to be Destro moving, so it will likely look somewhat better on-screen than it does here, although it will very, very clearly be all CG. You know, I’m kind of down with it. I really don’t know what else they could have done to make the mask work, and while it does seem to be obviously CG, I’m really glad they tried, you know? This whole Watchmen thing has gotten me super-invested when movies actually try to do things for the fans, so even masked Destro doesn’t end up so great, I really appreciate them trying, just like I don’t appreciate the whole Cobra Commander/Jason X nonsense.

Also, I need a name for my awesome Hollywood insider, because he’s been good to me and I’m under the impression this won’t be the end of him. Right now, all I can think of is Deep Nerd. Your suggestions in the comments would be greatly appreciated.

ALSO: Just to let the haters know, Deep Nerd (a.k.a. Geek Throat) was responsible for explaining the Deadpool Debacle and giving other Wolverine movie spoilers, all of which jibed exactly with an early screening reported later by io9. He’s legit. You might not like the news he’s giving us, but he’s legit. [DOUBLE ALSO: As mentioned above, Paramount made me take the pic down, which pretty much proves to me it was authentic.]