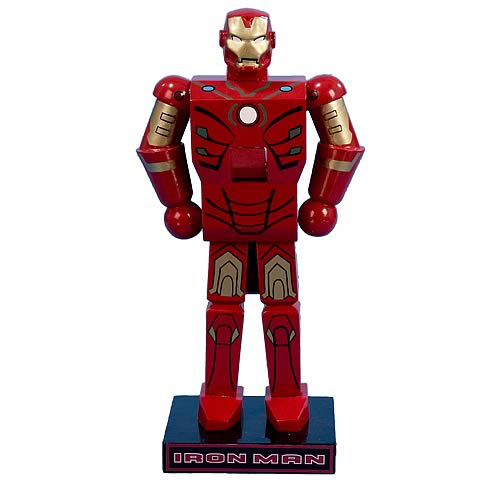 ?
Now the time is here — for the Iron Man nutcracker to spread fear! Why? Because it’s another phenomenally shitty nutcracker from the horrible bastards at the Kurt S. Adler company. Please note: 1) It’s an incredibly shitty likeness of Iron Man, and 2) It still can’t crack fucking nuts. The nuthole is way too small to accommodate anything other than an unshelled peanut, which doesn’t need cracking. Now if an awesome sculpt prevented functionality, then that would be something; or if the functionality prevented it having a decent sculpt, that might also be okay. HAVING NEITHER IS NOT ACCEPTABLE, KURT S. ADLER. And the fact that this company has done this several times already makes this the entire company complicit in crimes against nerds.

So stop it, Kurt S. Adler company. Either make better-looking nutcrackers or make them functional. This current bullshit will not stand. If you don’t, there will be some serious nuts cracked. By which I mean your testicles. Just wanted to make sure that was clear. (Via Gizmodo)