I’m a pretty large fighting game nerd, and yes, you should feel free to place emphasis on whatever part of that sentence you want. I made sure it works from every angle. I’ve been following the development of Street Fighter V fairly closely, figuring it would be my first PS4 fighter. I was a little concerned, though. The previous Street Fighter was excellent and deep, but it was plodding and technical, too: far too many 1 frame links (you have a 1/60th of a second window to input the next button in the combo, and if you’re off at all, it drops).

I made it through the line for the NYCC demo of SFV twice, and I spoke with a rep from Capcom for a couple of minutes from the floor to confirm what I saw: a far more forgiving game, something more accessible to new players, but with all the complication and depth that the people who mastered IV loved. Basically, it’s easier to combo and easier to move around, but a good player can still pin you down if you’re not as technical. That’s a good thing, except that now I have to go buy a whole new fight stick.

…if you check back in a few months, I might be really into an MTV show, and it will be completely by accident. The Del Rey booth was giving away free copies of books, so there’s a 50/50 chance it would have happened eventually, but had I not been hell bent on hitting the Batman panel on the Empire Stage, I wouldn’t have gone into that hall 2 hours early, and it would have taken me a year to get to The Shannara Chronicles at least. But you know what? The trailer looks pretty okay. My household is aesthetically predisposed to works of fiction that last for millions of pages and 15+ books, so I think this one might stick for a little while. 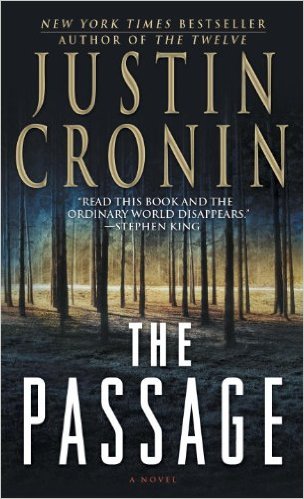 I know we’re not usually in the business of covering genre prose in here, but I’m a classy sumbitch and I like to read them long talkin books in addition to my fun picture books and my long button books, as I am now going to force my family to refer to my game collection. Anyway, City of Mirrors is the conclusion to Justin Cronin’s Passage trilogy; three books chronicling the fall of the world to a vampire disease outbreak. Imagine the first third of The Stand mashed up with Walking Dead and ‘Salem’s Lot, and if you’re not sprinting to get your hands on these books right now, I don’t know how else I can sell it. It’s been several years since the second book, The Twelve, came out, and it’s been at least six months since the last time I grumbled and searched Amazon for a release date. And I probably wouldn’t have noticed until Amazon’s algorithm remembered that I looked at City of Mirrors’ page twice in the past and emailed me a week before the release reminding me that I want this if it wasn’t for me going to take the free Shannara book, where they had The Passage with “Catch the conclusion to The Passage Trilogy in Spring 2016!” Now all I need is a Doors of Stone release date… 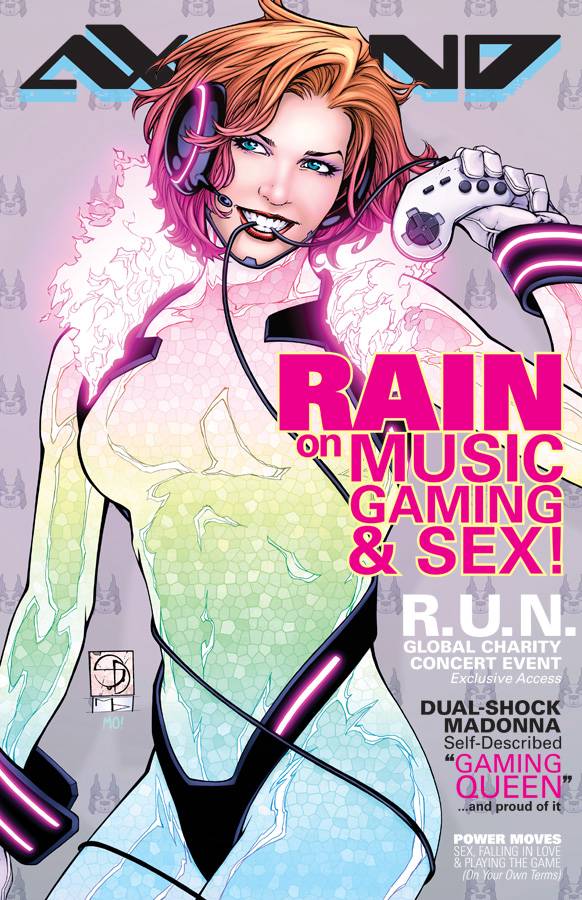 Shane Davis’s new comic from Image was a really pleasant surprise when I read the first issue. I spoke with him and Michelle Delecki, his inker and wife (so his better half on both counts HAHAHAHAHA shit why didn’t I think of that when I was standing there) about the first issue, and they sent over the first three pages of issue 2 to share with everyone. The book’s first issue took a look at Eric, a broken teenager retreating into Axcend the game’s beta who eventually discovers (at the end of the issue) that the game is real.

Issue 2 focuses on Rain, the second of three players in issue 1’s beta. She’s a pop star who’s not very happy with her life, which is how she gets drawn to the game. Davis does some really cool stuff with panel layouts and borders to show her spiralling life, all while maintaining that slickness and shine that makes his art so energetic and poppy. We also talked about some of the down-the-road stuff for the book, and…I’m not going to spoil things for you, but stuff keeps escalating. Like, continuously. Forever. Axcend #2 hits stands on November 4. 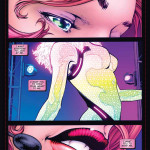 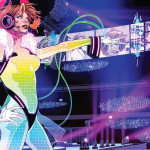 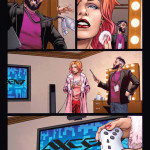 This is a little bit of a cheat, but they had a demo of the new G1 Transformers game at the Hasbro preview. In the five minutes I played the game, I stabbed and shot a bunch of Decepticon drones with Wheeljack, followed Grimlock down an alley, then fought Devastator. I love you, Transformers: Devastation. You’re everything I ever wanted out of a video game. 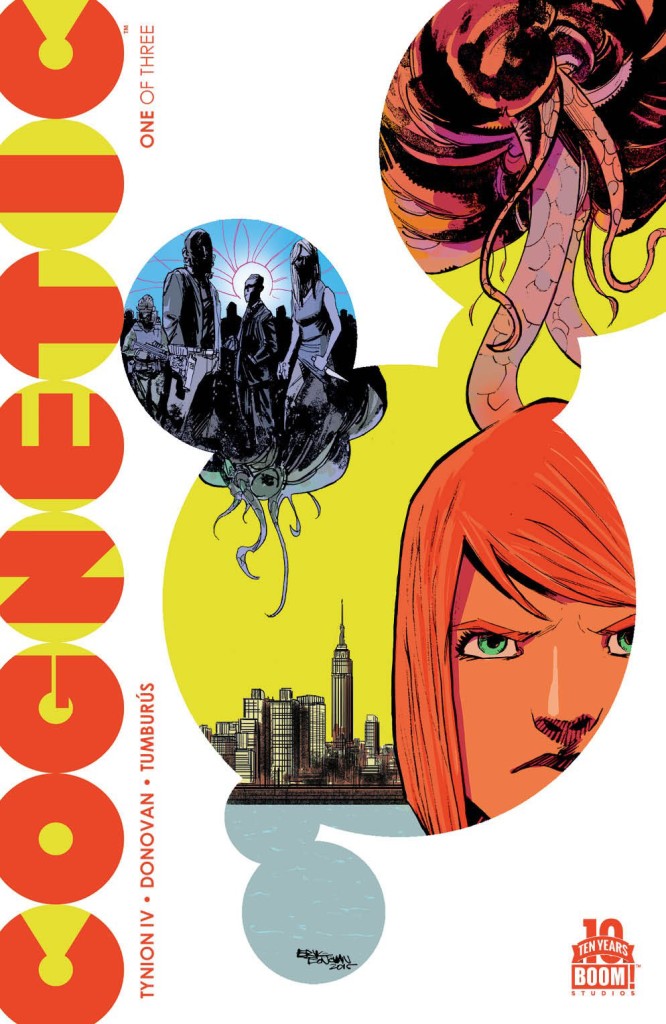 Memetic, James Tynion IV and Eryk Donovan’s surprise hit horror book, started around this time last year. It was (sorry, James, I made a mistake) the best horror comic that came out in 2014. The follow up, Cognetic, isn’t out for a couple of weeks, but Tynion and Donovan had copies at their table in Artists Alley, so you know I was all over that. It’s not a sequel as much as it is a spiritual successor, but even that isn’t entirely accurate. A very small part of why Memetic worked was because it came out of nowhere, because despite the creators having some credits to their names, no one was expecting such a heartfelt, effective, pants-shittingly terrifying story. So there’s a tonal difference in Cognetic, but one that I think works just as well. This new series is almost sly where the prior one was meek; it’s funnier, but knowingly so. There’s more…I don’t know, confidence? The material is still scary as hell, but it’s almost like the storytellers know that it’s scary and dispense with some of the idyllic mood-setting in favor of moving the plot along, and the outcome is really good. Go buy Cognetic when it comes out next week (I believe). 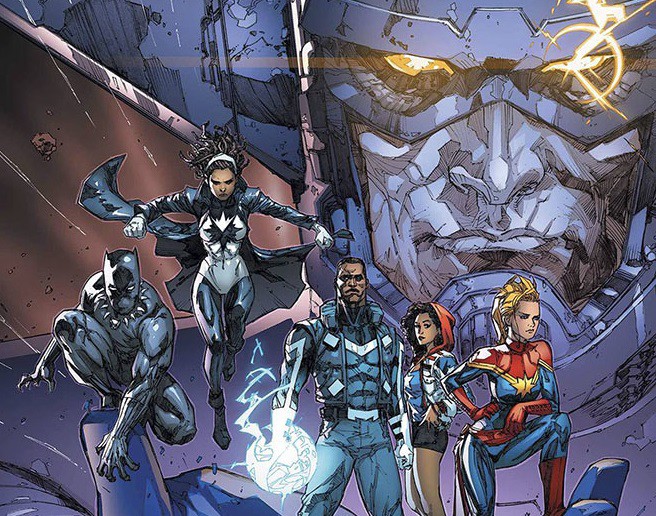 For the past couple of weeks, I’ve been feeling about Secret Wars almost the inverse of what I felt for Avengers Vs. X-Men. AvX was awful. It was an incomprehensible mishmosh of styles and stories that served no greater purpose beyond rearranging the furniture of the Marvel Universe AND it effectively gutted the X-Men books I’d been loving to that point. But…in the wake of the shitty miniseries, a bunch of talented, interesting creators were handed the keys to basically the entire Marvel Universe, so there was that to look forward to. With Secret Wars, one of those creators is tying off his giant Marvel story, and rearranging the face of the MU in his wake. But to be honest, I wasn’t super psyched about what was being left.

Hearing Dennis Hopeless, Gerry Duggan, Charles Soule and Al Ewing talk about what they’ve got coming, and seeing some of the announcements that came out (particularly Afua Richardson on something, the David Walker/Sanford Greene Power Man and Iron Fist, and Mark Waid and Chris Samnee on Black Widow), I feel better about what’s up. I couldn’t help but notice (maybe) Frenzy and Evan on Hopeless’s X-Men team, giving them 2 Horsemen (Angel and X-23) and 2 Apocalypses (Evan and Cyclops). And Kenneth Rocafort’s art on The Ultimates looked outstanding – they showed shots of Galactus’s world ship, T’Challa in space, Carol piloting one of Wakanda’s many shuttles. The bottom line is that a lot of new blood is getting a push there, and a lot of different voices are taking lead. That’s not a bad thing.