15. A Huge Line for Team Lumberjanes 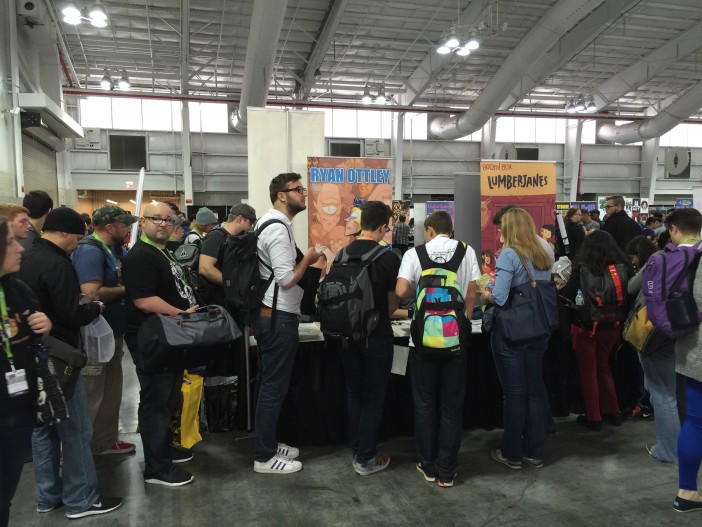 I Tweeted about this when I saw it, and it’s still applicable now. The fact that, at arguably the biggest con in the country, the longest line I saw in Artists Alley was for Lumberjanes autographs is everything that’s right about comics right now.

A lot of the panel I went to Friday night, “Push Boundaries Forward: Gender, Diversity and Representation in Comic Books,” was dedicated to a discussion of good and bad representation. Joey Stern, a founder of Geeks OUT (the Flame Con folks), said that he was elated to even see ridiculous queer stereotypes when he was younger, because otherwise there was nothing else. Shannon Waters (of team Lumberjanes) disagreed, saying that while there may have been a dearth of representation then, now we have options.

The internet, the proliferation of DIY webcomics and funding streams, and the explosion of smaller, (usually) creator-owned publishers has helped give an outlet to the fandom that was there all along, so that now they don’t have to graft facile comparisons of civil rights leaders to Professor X and Magneto, because they can actually see comics with actual civil rights leaders in them. And this creates a feedback loop: books like Lumberjanes or Genius are successful because they’re well written, because they’re full of interesting characters with more depth and dimensions than just “girl” or “black” (a theme brought up by Waters at this panel, but also mentioned repeatedly by Ashley Eckstein at the Star Wars: Rebels press conference, when she was talking about Hera and Sabine’s popularity). That success strips away the armor from the “well, they just aren’t marketable creators” argument that had for so long stymied any entree into the big 2 for anyone that wasn’t part of the network, forces them to add new creators and new characters to their franchises, in turn creatively reinvigorating 70 year old comic characters and making them profitable in a way they’d never been before and giving those new creators more opportunities and a bigger audience to bring with them back to their creator owned books, if that’s the path that they choose. 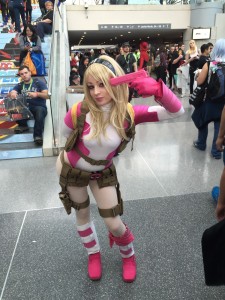 Ten years ago, I stood in my first con, New York Comic Con 1. The entirety of that show was in what’s now the queue hall for wristbands, and it was virtually indistinguishable from the dinky Big Apple cons that preceeded it: indie cartoonists hustling to get their zines in front of big editors; big 2 creators selling their comps and original art for drinking money (sometimes eating money); porn artists drawing Psylocke with less shame than normal. Meanwhile, I stepped back at one point on Saturday and I was surrounded by a Squirrel Girl, a Wiccan, 2 Spider Gwens, a Louise Belcher and a Miles Morales Spider Man. Grant Morrison, when he took over on New X-Men back around the turn of the millenium, said that there are only 5 X-Men stories out there. That’s not true. That he could even claim that is evidence of a systemic failure by the industry, and we were the ones who suffered from that failure. That was the kind of closed mindedness that kept giving Chuck Austen a shot. Different creators bring different perspectives and tell different stories, and just about anyone reading comics right now is benefiting from those voices being added to the chorus. I hope we spend the next 10 years doing better.