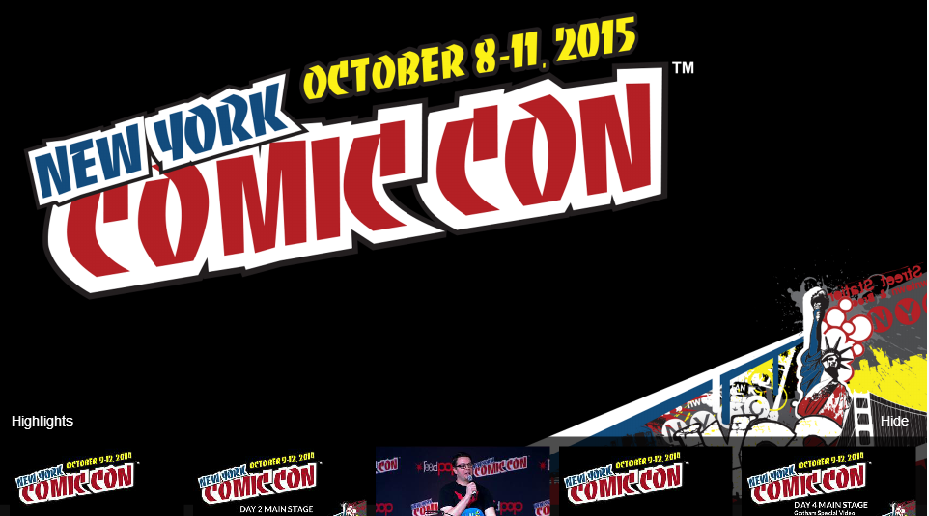 The 10th New York Comic Con is in the books, and only after I got five minutes to sit down (and 16 hours to sleep) did I realize just how much happened there. Even with the toys in their own separate wrap up, I still had 25 things I got REALLY EXCITED to talk about from this year’s con. And once I cut out the technical stuff about fighting games and the one where I got really complainy about there not being enough small manga dealers on the floor (still don’t have Pluto. sigh), I still had fifteen awesome things I saw on the floor of this year’s New York Comic Con. Except for toys. And complaining. Ok there’s some complaining. 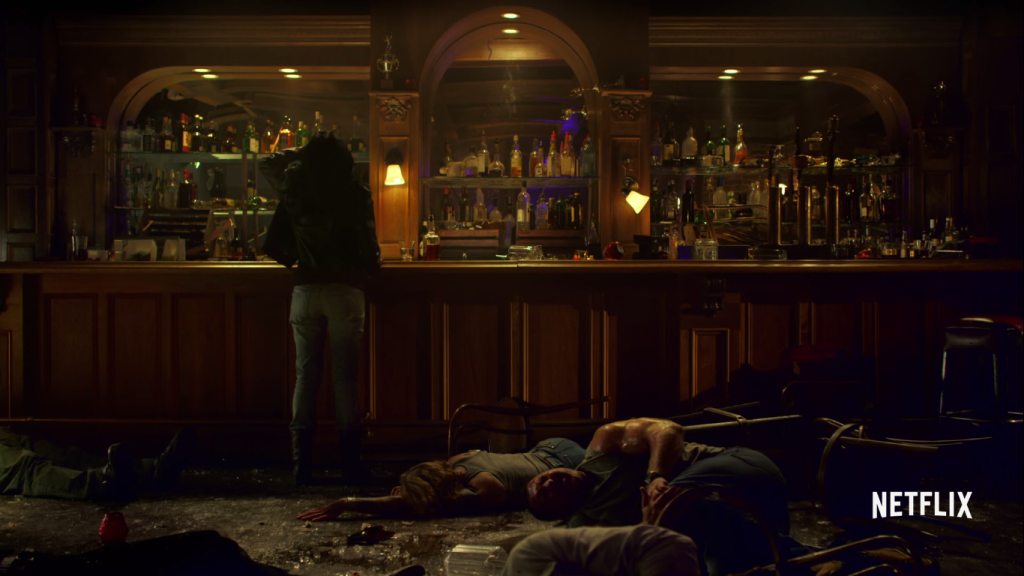 That was certainly something. At Saturday’s Marvel TV/Netflix panel, they ended the presentation by showing the audience the entire first episode of the new show, premiering November 20 on Netflix.

I was there for the entire panel, and while I may have gone a little overboard on speculation (“Hope” and “Malcolm” are definitely not Colleen Wing and Misty Knight, despite their connection to Carrie Ann Moss’s Iron Fist-related Jeri Hogarth), I don’t think I got across how engrossing the episode was. Krysten Ritter makes you really believe she’s just barely holding it together as Jones, as she dominates the action and point of view of the episode. You can’t help but be a little sad for her as she tries to hide how broken she is from the rest of the world. David Tennant’s Purple Man is creepy as shit, and used sparingly to great effect.

I doubt it’s spoiling anything to talk about the toilet scene: at one point, Jones is trying to con her way onto a bad dude’s schedule so she can serve him with legal papers. She does so while taking a dump and scanning her laptop for background info on his secretary, rolling her eyes while she bullshits this poor idiot on the other end of the line. It’s like the crew of this show reached into the comics and pulled a good, fully formed TV show out. This is the fullest realization of a Brian Bendis comic on screen that I’ve ever even imagined, and I say that in a good way. I can’t wait for the rest of this show. 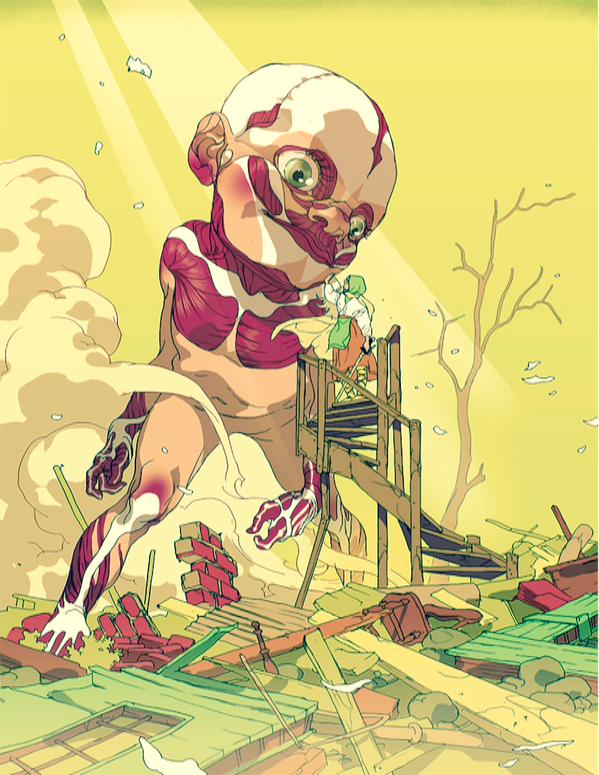 The worst part of con is trying to sift through all the hype to figure out if someone has something really exciting to announce, or if they’re just narcissists. That “huge announcement” that was supposed to happen Saturday? Turns out it was for a T.H.U.N.D.E.R. Agents movie funded by China. Is there an emoji for “loud mouthfart”?

So you could probably hear me roll my eyes a little at “the biggest Attack on Titan announcement ever” last week, and you weren’t wrong. I figured it was oversell. Man, was I off on that. Thursday afternoon I looked down at my email and yelled “JESUS CHRIST” when I saw that Kodansha got a TON of non-manga people to contribute to an Attack on Titan anthology, including: the brothers Hanuka (The Divine), Scott Snyder (Batman), Gail Simone (most recently the Swords of Sorrow crossover), Paolo Rivera (The Valiant), Afua Richardson (Genius), Michael Oeming (Thor: Disassembled, the second greatest Thor story of all time)(also Powers and The Mice Templar and a bunch of other stuff), and Babs Tarr (Batgirl), among many others. The manga is already great, but it’s such a rich yet ridiculous setting, I can’t help but be incredibly excited to see what these folks are going to do with it.

Honestly, the Daredevil season 2 sneak peek was kind of exciting, but the season 1 sizzle reel was better. I forgot just how intensely awesome it was, and I got home and watched the hallway fight again. Yeah, it’s cool that Elektra has a mask, or that Jon Bernthal really appreciates being the Punisher, but if the fights aren’t as good or better in Season 2, the show will be a failure. The crew should really be practicing for Iron Fist anyway.

4. The Batman Comics Are In Really Good Shape 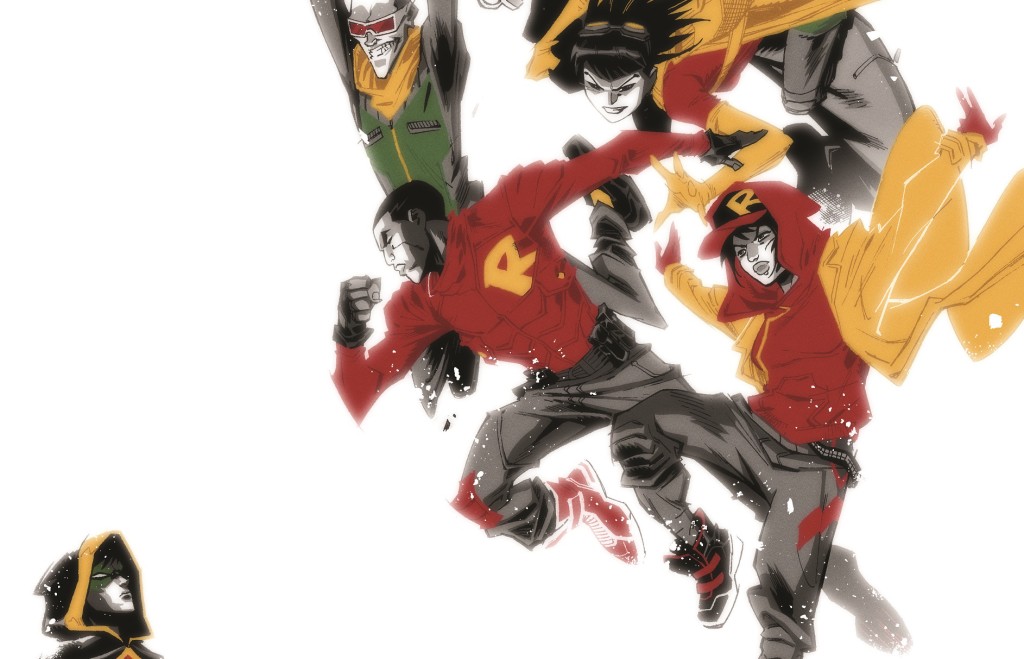 Despite not having an Earth-shattering, Internet-destroying announcement dropped on me, I think the Batman comic panel was really valuable. It helped remind me that the Batman books as a line are in an incredible place right now – gifted creators working together to tell some of the most interesting stories with the character that I’ve ever read. And despite Khary Randolph giving the best elevator pitch for We Are Robin (“I’ve been watching a lot of Warriors and listening to a lot of hip hop”), there was one moment with Scott Snyder that made me really happy to be reading these books.

He was asked about how he makes Gotham into its own character and has spent a lot of time building the city itself up, and his response was a thoughtful, insightful explanation of his operating theory on Batman, passionately demonstrating why he’s such a perfect fit for the book. He talked about how Gotham is a reflection of the scary New York he grew up with, and how your place can influence your person. He told everyone that there is one big theme to every arc that he’s trying to examine: “Endgame” was what Batman meant to him when things got dark; “Zero Year” was what he wanted Batman to mean to his kids, and then he said that the current arc, he wants it to be about what Batman means to the real world. This answer comes not too long after the issue he co-wrote with Brian Azzarello and had Jock do the art on that was more or less about racial profiling was released. I like that he’s thinking about these things, and I like that he is supported by people who are as or more thoughtful about the parts of Batman they get to write.

Speaking of really thoughtful writers, there was no chance in hell that I was getting through four days on the con floor without fawning over Omega Men for at least a minute with their writer, Tom King. 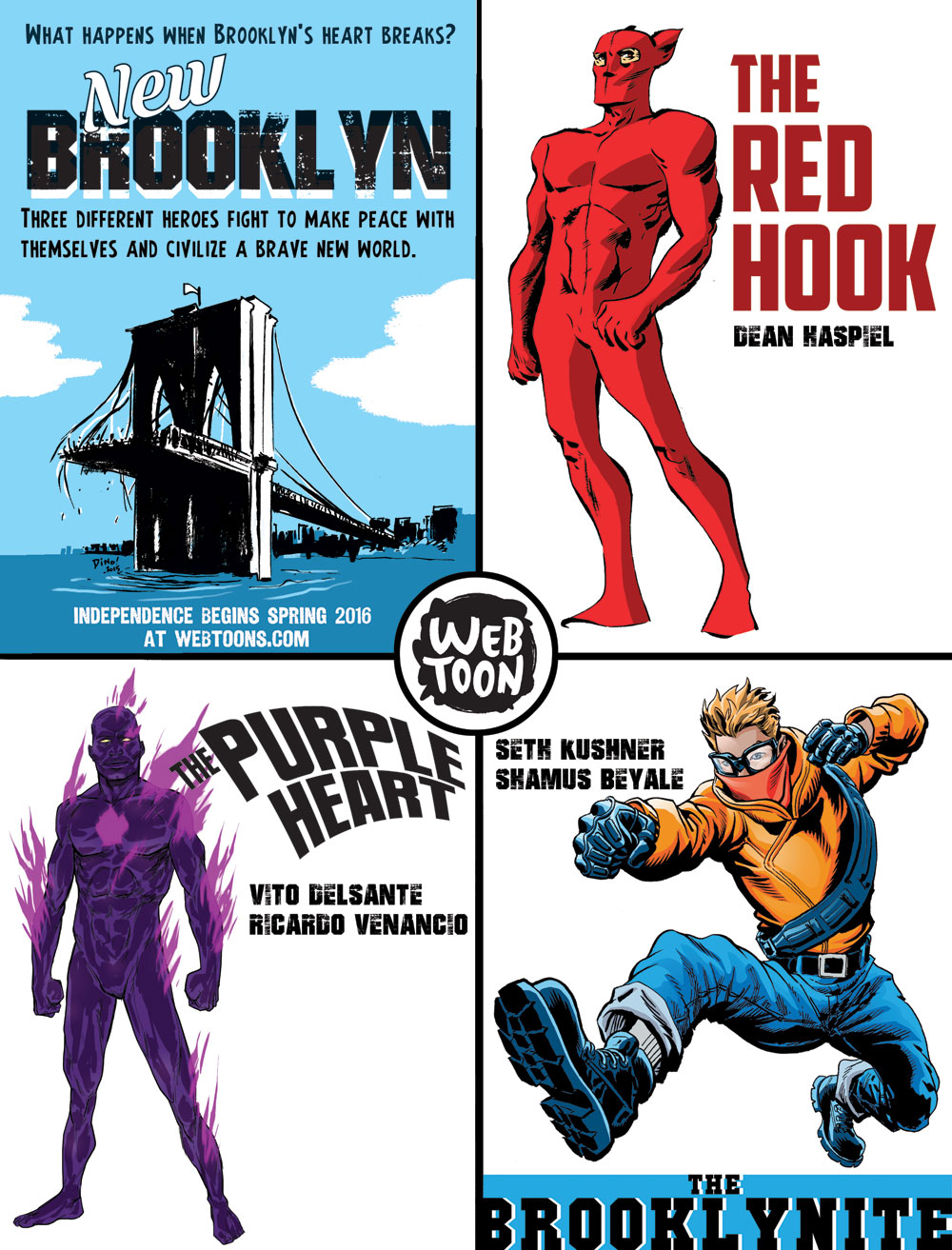 Dean Haspiel, most recently of Dark Circle’s The Fox (which is a ton of fun) is bringing his latest project to LINE Webtoon. I talked to him for a few minutes about it, and I’m 100% on board: it’s building off of a story he and his former studiomate, Seth Kushner, who passed away in the spring following a fight with leukemia, had developed about a cosmically powered Brooklyn seceding from America in disgust and imbuing three individual Brooklynites with super powers: Haspiel’s The Red Hook, a gifted thief forced by the Omni-Fist of Altruism to become a hero (or the fist kills him); Kushner and Shamus Beyale’s The Brooklynite, a character who gains Superman-level powers but can’t quite manage the dual lifestyle of being a hero; and Vito Delsante and Ricardo Venancio’s The Purple Heart, a disillusioned former soldier who just wants to be left alone, who is chosen to be the cosmic protector of Brooklyn. Haspiel described them basically as Batman, Spider-Man and the Silver Surfer.

The world sounds fascinating, and Haspiel, writing and drawing Red Hook and the architect of the New Brooklyn Universe, is one of the best in the business. Seriously, go check out The Fox. He’s also really excited for the project, and I’m looking forward to seeing how it translates from a normal comic pitch to LINE Webtoon. He said he has had to modify his work somewhat – when you read a comic on LINE, it drags down, which boxes a creator in a little bit. Haspiel mentioned he had to dial back his propensity for doing inset panels because of the change in the reading experience. I’m psyched to see not just what sounds and looks like good comics, but how he and the New Brooklyn Universe team adjust to the new format and make it work for them. I’m a little disappointed that the newly independent Brooklyn didn’t also take Staten Island with her, but I can move past tha 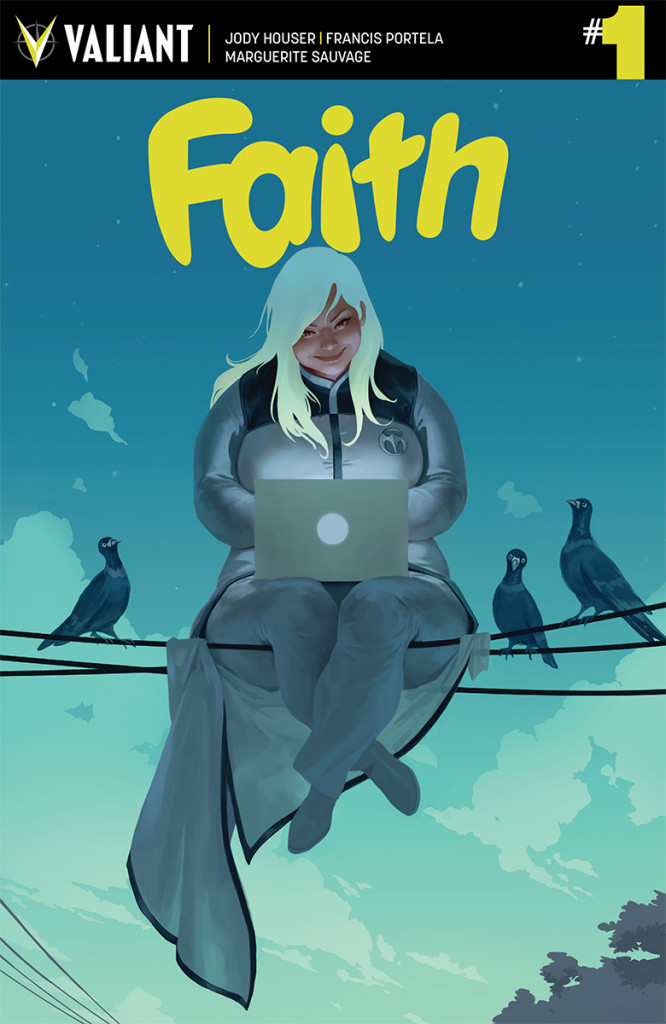 I was talking to a friend this weekend, and I mentioned that I feel bad that I don’t review more Valiant books despite regularly reading so many of them, because they are as a whole so consistently good that I have a hard time writing them up without repeating myself or sounding hyperbolic. Because I really like being measured when I talk about comics. Later, I talked to Jody Houser, the incoming writer of Faith, AND SHE IS SO AWESOME AND THE BOOK IS GOING TO BE SO GOOD OH MY GOD I CAN’T WAIT FOR IT!!!! [insert a full page of alternating 100 and flame emoji]

She said she was drawn to Faith because she’s such an identification character for all of nerddom, and that she’s having fun writing her because she’s such a strong character, so self-aware as a person of her own morality and her own personality, that there isn’t a lot of self-discovery needed in the book. It’s not a question of examining Faith as a character as much as it is putting her through a bunch of different situations and seeing how she finds a way to deal with them. Houser said to expect guest stars, and she finished by saying “How could you not have fun with a character like Faith?” Normally this is the part where I’d say “I’ll show you how” and then post a link to the Play Arts Superman statue with the “I just murdered a dude” alternate head and…hmm. I suppose I did just that. Well. Faith, from Houser, Francis Portela and Marguerite Sauvage, is out in January.