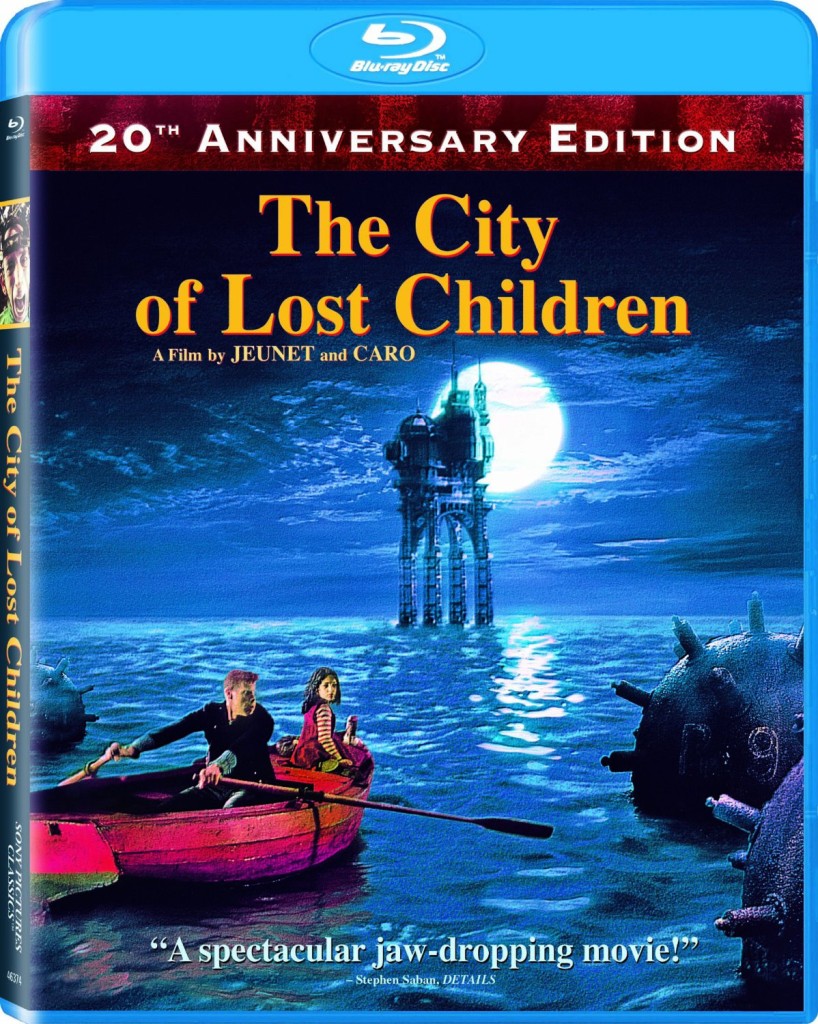 The City of Lost Children: 20th Anniversary – If you know the name of director Jean-Pierre Jeunet today, it’s probably because of this, his follow-up to the cult hit Delicatessen, and a visual fantasia on a par with the best of Terry Gilliam. A young girl teams with a mentally slow circus strongman (Ron Perlman, speaking only in French) to find a mad scientist who is stealing the dreams of children, and I wish I could remember more about the plot, but really, it’s the fantasy world Jeunet creates that sticks with you. For a while this was quite the popular midnight movie in L.A. following its theatrical run. Then Jeunet made Alien Resurrection, and we all turned on him a bit until Amelie, which is still his absolute masterpiece. His last movie barely even came out here, but he is still making equally eye-popping fantasies today, somehow without the aid of comic-book source material. The Blu-ray includes a new HD master, and a commentary with Jeunet and Perlman (though I do not know in which language).

The Hobbit: The Battle of the Five Armies (Extended Edition) – Or, as most people call it, The Slog-It: Battle of the Five Hours Awake (Stuff Not in the Book Edition). Peter Jackson’s final and most masturbatory Middle-earth movie (until he manages to get the Silmarillion rights) is enough to make one long for the goofiness of Rankin-Bass and their silly songs, as a thrilling opening battle with Smaug soon deteriorates into endless shots of CG armies crashing against each other and Legolas defying gravity like he’s in the Matrix. Fans cared enough about Star Wars to re-edit The Phantom Menace, and I have a feeling there is a really great three-hour Hobbit movie to be had (the first two films are fun, while this one makes you cry uncle) – but somebody has to give enough of a shit to actually put it together. Anyway, this is the version of the movie that earned an R-rating, presumably because some part of one of the CG armies bleeds too much. It’s not like Evangeline Lilly takes her shirt off or anything.

The Man From UNCLE – Speaking of crying uncle, Henry Cavill and Armie Hammer made an interesting team in this Cold War-era spy reboot that ignored too much of its source material but managed to be likeable nonetheless. I don’t believe it did well enough to start a new franchise, but it did prove that Henry Cavill has more range than snapping necks and screaming about it.

Jack and the Beanstalk – I’m not sure how I missed a fairy-tale adaptation starring Gilbert Gottfried, Chevy Chase, Chloe Grace Moretz, Katey Sagal, Christopher Lloyd, Wallace Shawn and James Earl Jones…but I’m not sure I have the heart to catch up on it now. Because what if it isn’t remotely as amazing as it should be with that cast? I mean, I think I’d have heard of it if it didn’t suck. Somebody else rent it for me and let me know, because it’s not like this is my job or anything.

The Collected Works of Hayao Miyazaki (Amazon Exclusive) – If you have the money and the inclination, this set of all 11 Hayao Miyazaki animated features would make a great Christmas gift for somebody, whether they know it or not. Anyone familiar with his works need not be sold on them, while anyone who thinks all great cartoons begin and end with Disney will generally find Miyazaki movies to be their gateway drug to anime. On the other hand, the discs do not include all the special features on individual releases of the discs, so this may not be the ideal for your super-film nerd friends. That said, if you give this to someone as a gift and they whine at you about extras, they are ungrateful a-holes. But if you’re a collector yourself, individual discs are the way to go.

P.S. I do not care about “dubtitles” versus “subtitles.” If one does not speak the language, I think it’s helpful to have a translation be more contextual than literal. And apparently the subtitles for hearing-impaired are more literal anyway.

Ticked-Off Trannies With Knives – I reckon the title says it all.

Faust – German silent movie epic adaptation of the classic tale of soul-selling to Satan, from the director of the original Nosferatu. If you have the patience, you need to see this.

FDR: American Badass – Barry Bostwick’s Franklin Roosevelt and Kevin Sorbo’s Abe Lincoln fight werewolves. Just like they really did back in the day. You see, Mr. Sorbo? You didn’t have to make that other movie to prove God’s not dead, he’s truly alive. This already did the trick.

Gatchaman: The Movie – 1978 animated movie combining episodes of the first series from Japan with a few new scenes. Maybe not the droid you’re looking for.

Those are my highlights for this week. What else might you be picking up?