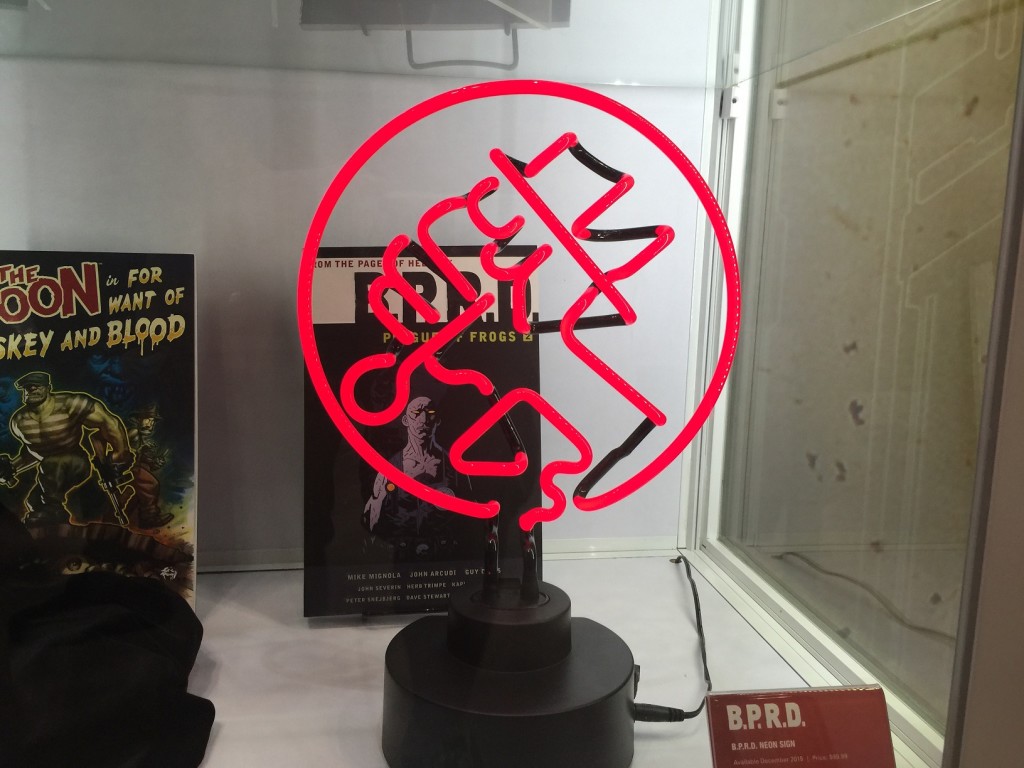 I never really noticed before that the BPRD logo could totally just be an enormous wine glass. Maybe a wine square vase on a thin stem. Either way, this light was over at the Dark Horse booth, where they were hiding a whole bunch of cool toys, like…

8. All the Game of Thrones toys. 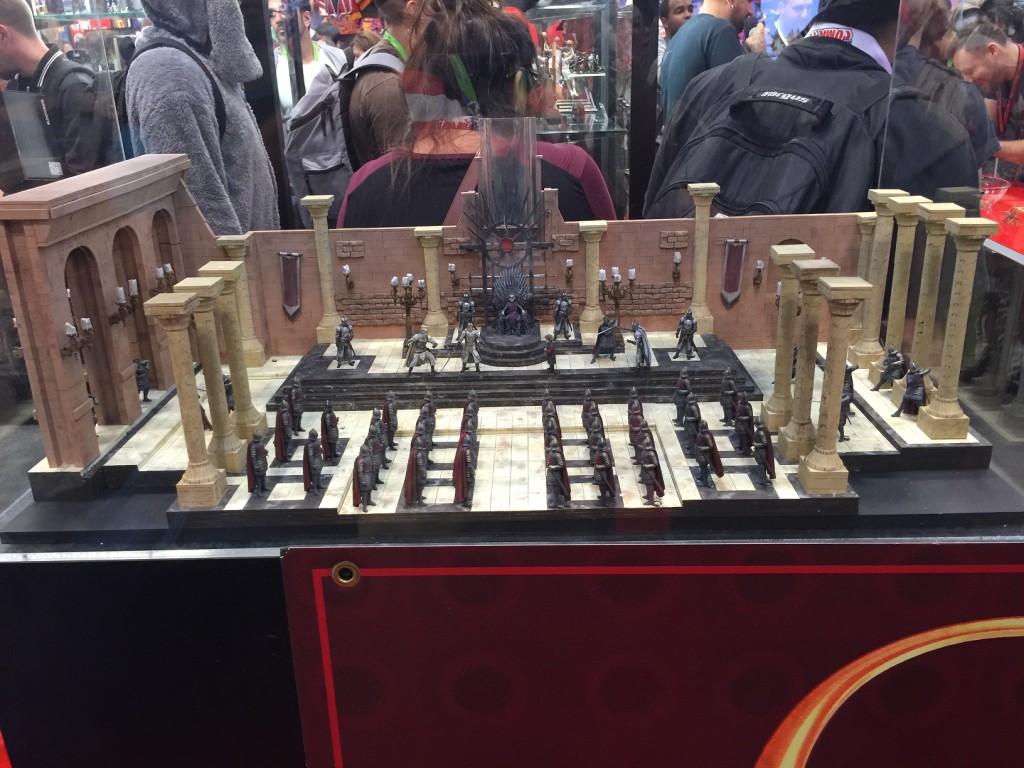 From the very nice looking exclusive Varys, to the Dragon Egg bookends at the Dark Horse booth (well-timed, since SOMEONE here :points to self: is on the market for new bookshelves) to the ENORMOUS Nipple-O setpieces up at the McFarlane booth, it seems like everyone who had GoT stuff made sure to only bring the best. Speaking of, in yet another smooth segue…

9. Especially the direwolves from Factory Entertainment 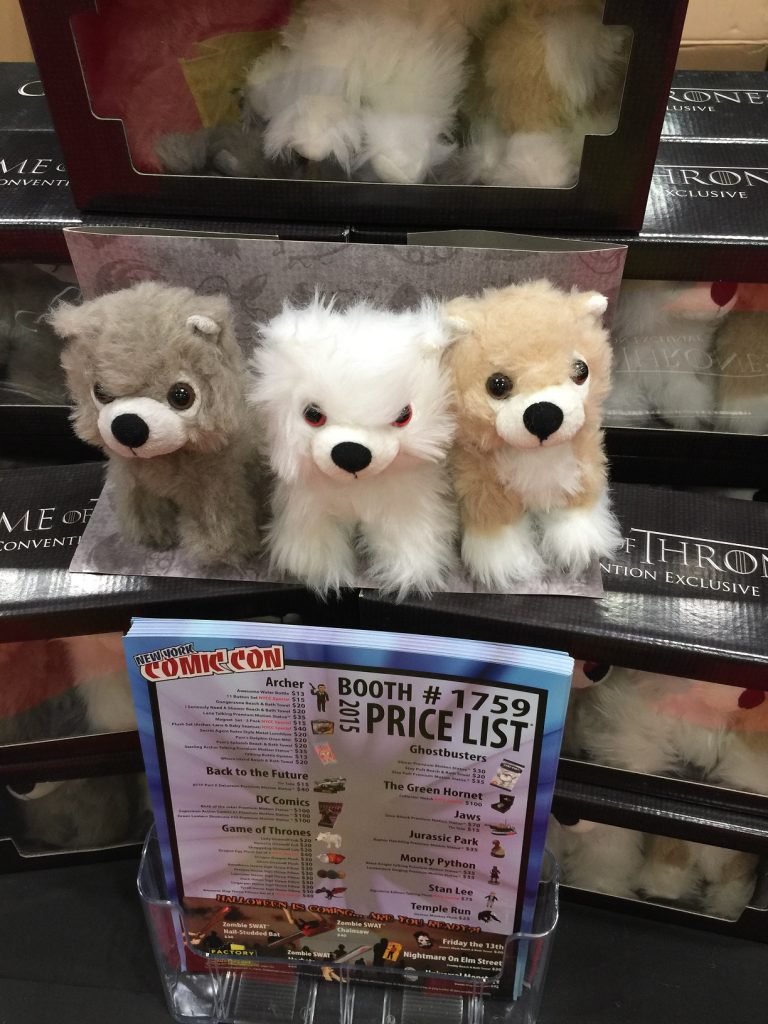 Every single year for the past 3 cons, I sprint in a panic on the last day to the Dark Horse booth and shout “DOYOUHAVEANYEXTRANAGASBEHINDTHECOUNTER” to try and get something for my niece and/or nephew. And every year, the guy behind the booth is like “you’re within 50 feet again please stop it.” This year, as I was kicking dirt down the empty aisles of the pre-10 AM Sunday crowd, I stumbled across Factory Entertainment’s booth, and they had these little dudes. They’re perfect: they look just like my dog (who the kids adore), they’re cuddly as hell, and they’re the exact right amount: one for my nephew, one for my niece, and one for their dad, who regularly gets pouty about the kids getting all the good toys. Seriously, they’re so soft that I almost snuck them out of the box to hold when I went to bed last night, but then the dog would have pulled them from my hands and we’d never get them back, so I got past it.

I also got a chance to sit down with the Hasbro Marvel Legends folks to talk about the next wave of Legends figures, including Red Onslaught. Keep your ears peeled for me to beg them to make God Emperor Doom the next build-a-fig after the X-Men line. Also, you can’t see it, but I did tweet photographic evidence of my tremendous nerdery – after seeing the wave the night before, I made sure to wear an appropriate shirt to the talk. 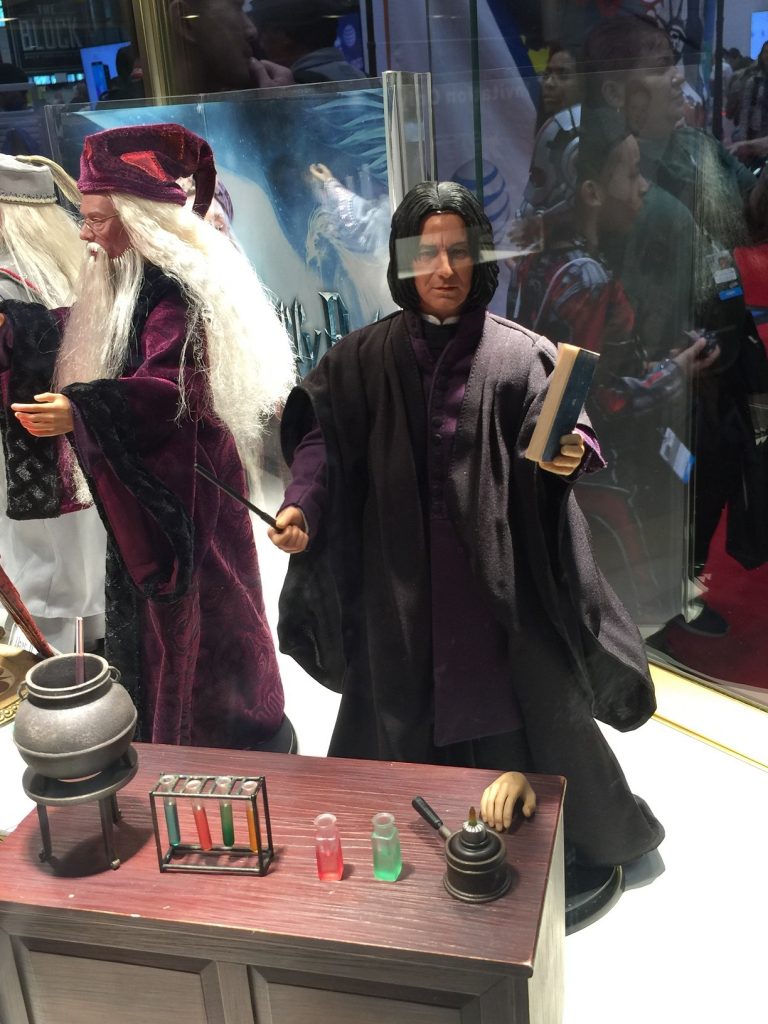 I mentioned this on Twitter as I was standing in front of them, but going back through my photos made me think it again: the Star Ace toys’ Harry Potter figures aren’t that interesting of sculpts. The displays didn’t really show a lot of dynamic movement or poses. What made them really good, though, was their incredible attention to detail – even down to the creases on Snape’s book. And they put Dumbledore’s phoenix in front of Richard Harris Dumbledore…aww. Fifty extra points for Ravenclaw for their exceptional toy display setup. 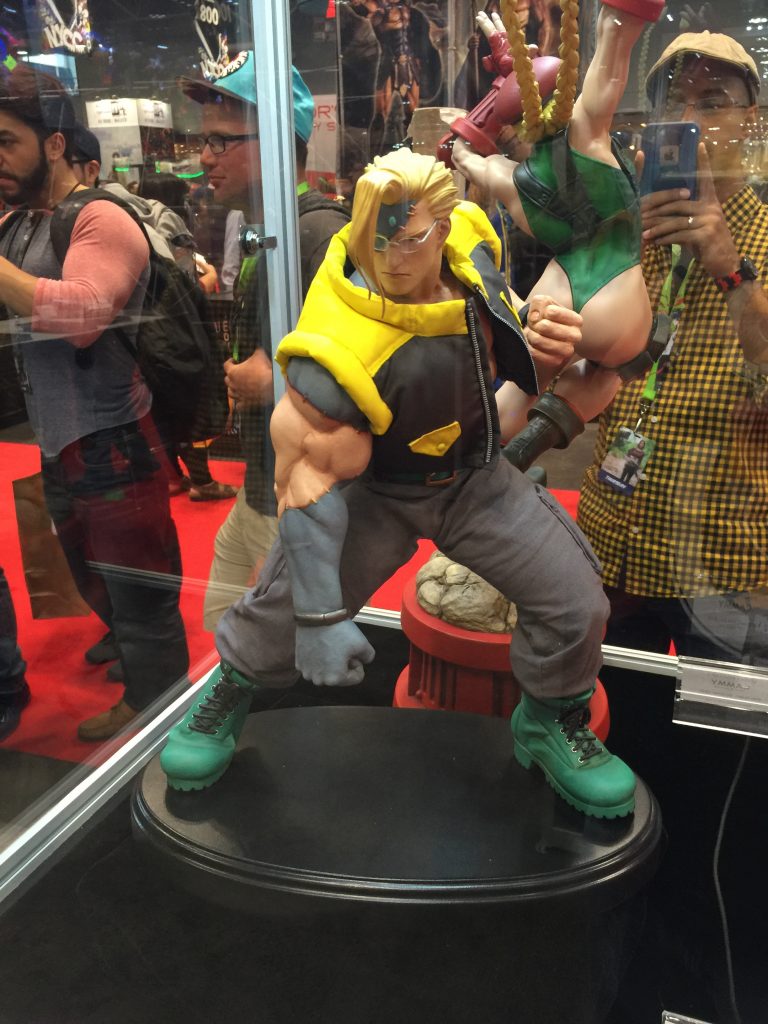 I make no secret of the fact that I’m easily swayed by fighting games. Capcom had the latest build of their upcoming PS4-exclusive Street Fighter V out for everyone to play with at this year’s con, and since I used him all the time in Marvel vs. Capcom 2, of COURSE I picked Charlie. Check back tomorrow for my thoughts on the game, but for now, not 10 minutes after I finished my first round of SFV ever, I stumble across this Charlie statute at the Pop Culture Shock booth, and it is badass. The Cammy statue behind him is no slouch, either: both have really gorgeous colors and awesome action poses. The difference here, for me, is that I am atrocious with Cammy. 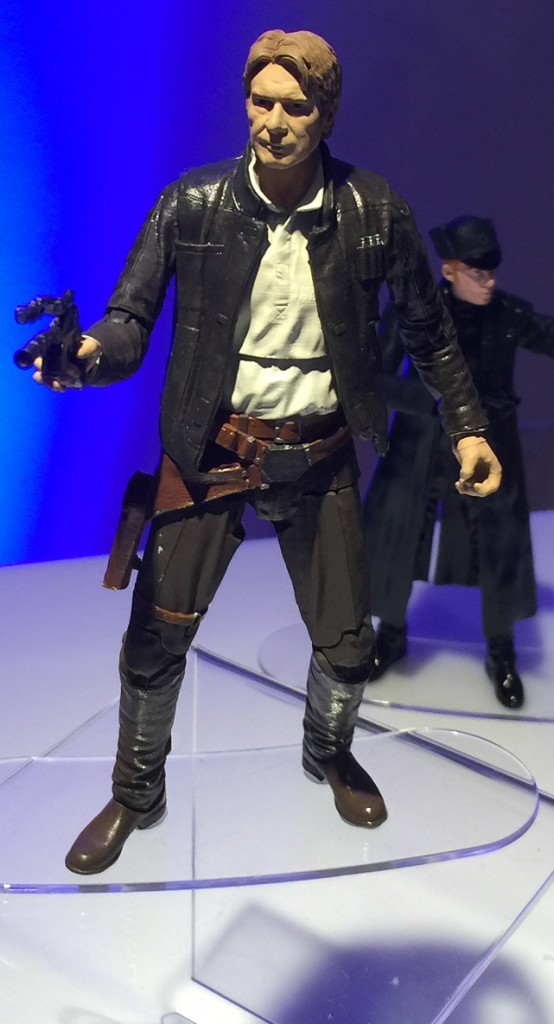 I can and I can’t believe that they actually aged Han’s action figure. I can’t believe it because he’s a big movie star who’s going to probably hire a stuntman to do all but two days of his time on the set of the next Expendibles. But I also can’t believe it because he looks old in real life. His skin looks old. There’s a little sag to it, but on Ford, it looks like his cheekbones are migrating, too. I get that head sculpts are usually hyper-detailed, but I’ve rarely seen one that’s quite this good. That is, all snark aside, what the Hasbro people are really good at. That level of fine detail on an action figure that has an even money chance of going through the washing machine at least once in his life is a labor of pride at least.

In all seriousness, all the Black Series figures look great, and the vehicles scratch an itch I never knew I had. It was B Wing-shaped, right in the middle of my back. 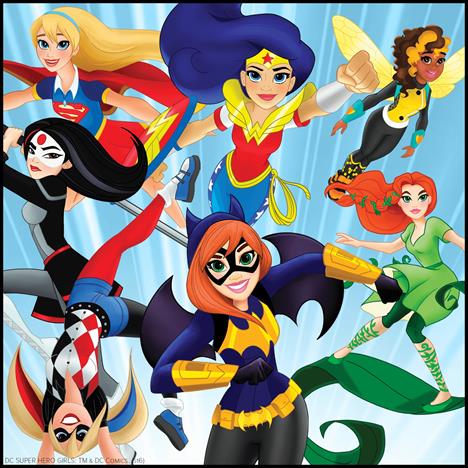 I get that it seems like panderey bullshit, and that the dolls don’t have the articulation or the balance that a good action figure does, but I’m 100% on board with this “let’s slap some superhero garb on some Bratz dolls” initiative from WB. I like it for one reason and one reason alone: this is going to be a bigger gateway drug than yey.

First of all, they’re not being shy about adding in some deep cuts. Principal Amanda Waller proves that. Hell, Katana and Bumblebee do too. But they’re also really into having a lot of stuff going on in the background: I’m fairy certain the Green Lantern I saw in the background of the episode they had on was Guy Gardner. You know someone is going to be watching that episode who’ll say “I wonder who that was?” Google him, and disappear for three days, muttering about Warrior when he’s finally found. 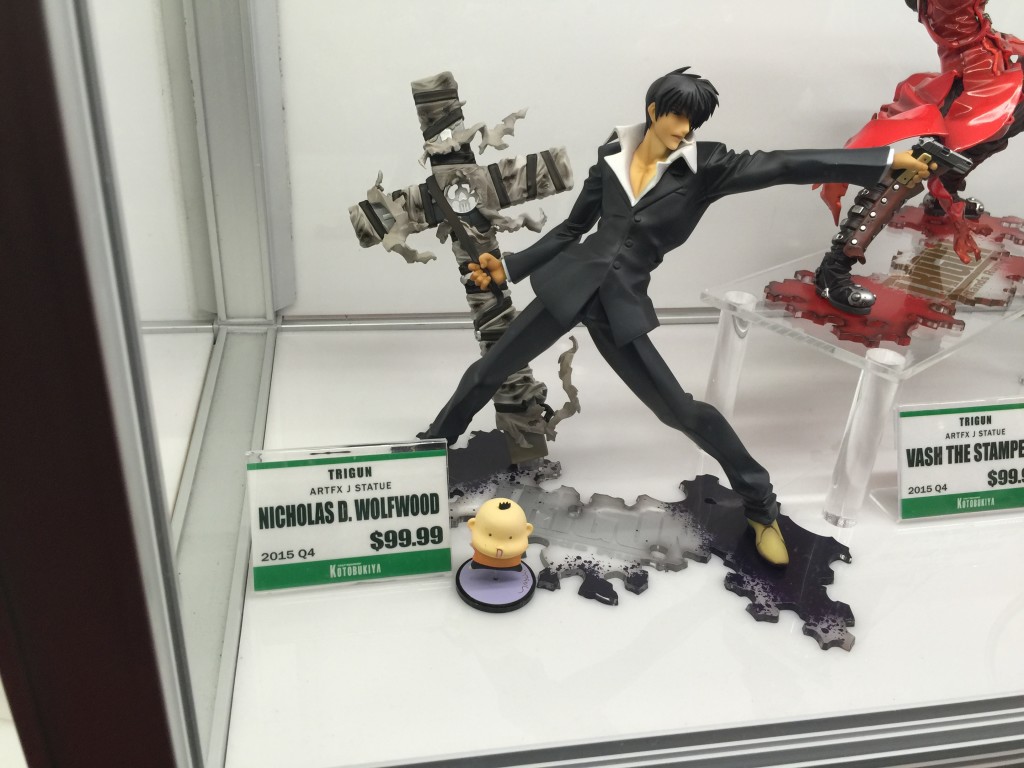 OHMYGODTHESEARESOINCREDIBLE. Kotobukiya actually did have a bunch of stuff I hadn’t seen yet – they had a new Magneto statue that looks amazing; 3 new Bishouju statues, which…ymmv. And then they had these, two of my favorite characters from my maybe favorite anime, and they look stunning. Kotobukiya generally does very good work: they can hang with some of the more ridiculous toy makers out there, but at the end of the day, they always pull back before they hit Play Arts Kai levels of insane. No elaborate future samurai armor on anybody unless they’re actually future samurai. I don’t think Kotobukiuya’s Superman’s ever killed anyone, as opposed to the Play Arts one, who has obviously done so and is still looking to do so.

That does it for the toys and accessories: check back tomorrow for our round up of the biggest non-toy news from the weekend, as well as a review of the first episode of Jessica Jones. And if you want to see all the toy pictures we took at NYCC 2015, be sure to check out our Facebook page. We have all the new Star Wars Black Series; Blaster; all of Namco’s DBZ toys; and way more. What toys are you most excited about from New York Comic Con 2015?