6. You Can Challenge Your Painting Skills and Maybe Gain New Fans. 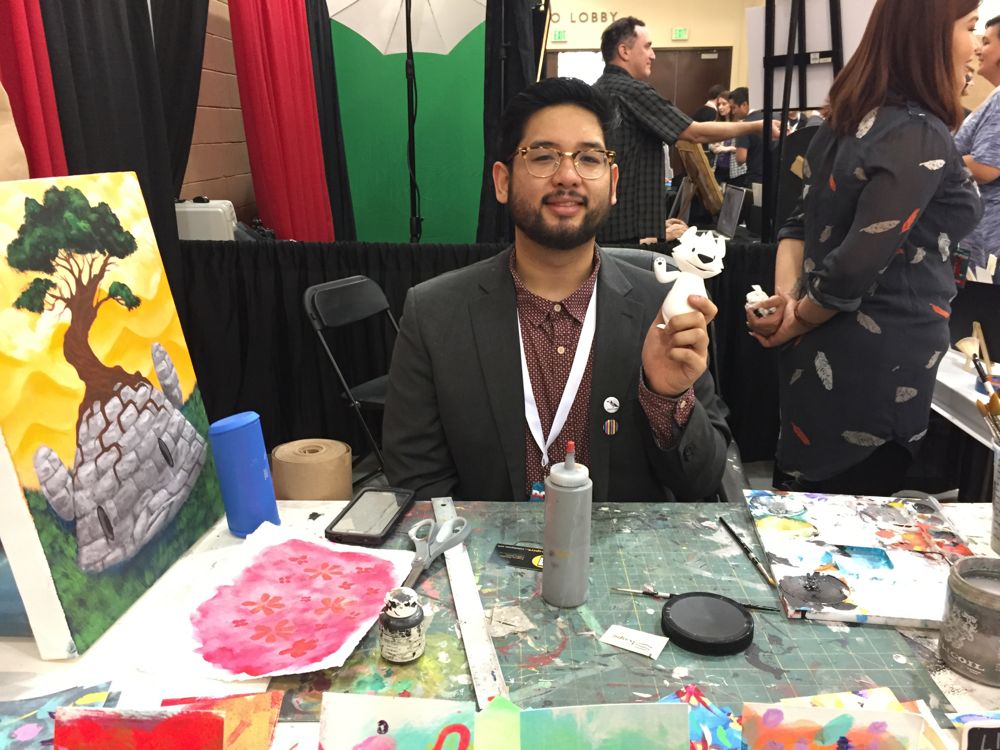 Philip Lumbang holds a toy that he planned to customize for a fan. (Photo: Liz Ohanesian)

Philip Lumbang was really good at getting the crowd’s attention. The L.A.-based artist, who started out as an intern for Obey Giant and also previously worked as Shepard Fairey’s art assistant, gave a pitch when people walked past his booth. He mentioned that you can get his small paintings for $20, but added that the larger originals available too. He showed off the work station that he set up to take commissions over the weekend. It seemed to work. On Sunday, a fan brought by Lumbang’s bear figure, now out of production, for him to customize.

Lumbang used to work on the streets, but now he only occasionally does commissioned murals. “The thought of me getting arrested does not sound awesome at all,” he said of leaving the street art world behind him. Now, he’s mostly a gallery artist, but customizing toys presents an exciting challenge for someone who came up working on flat surfaces. “When you’re working with a panel, it’s flat and your brush goes where you want it to go,” he explained. “When you’re working with vinyl, you’ve got to really take into account the shapes and where your brush is going.”

Plus, working on toys helps expose artists to communities who don’t already know their work. “Every day, I’m meeting new people who haven’t seen my art before,” he added. That’s pretty sweet for people whose chosen career is based in part on an ability to hustle.

7. You Had a Hit and Went With the Flow. 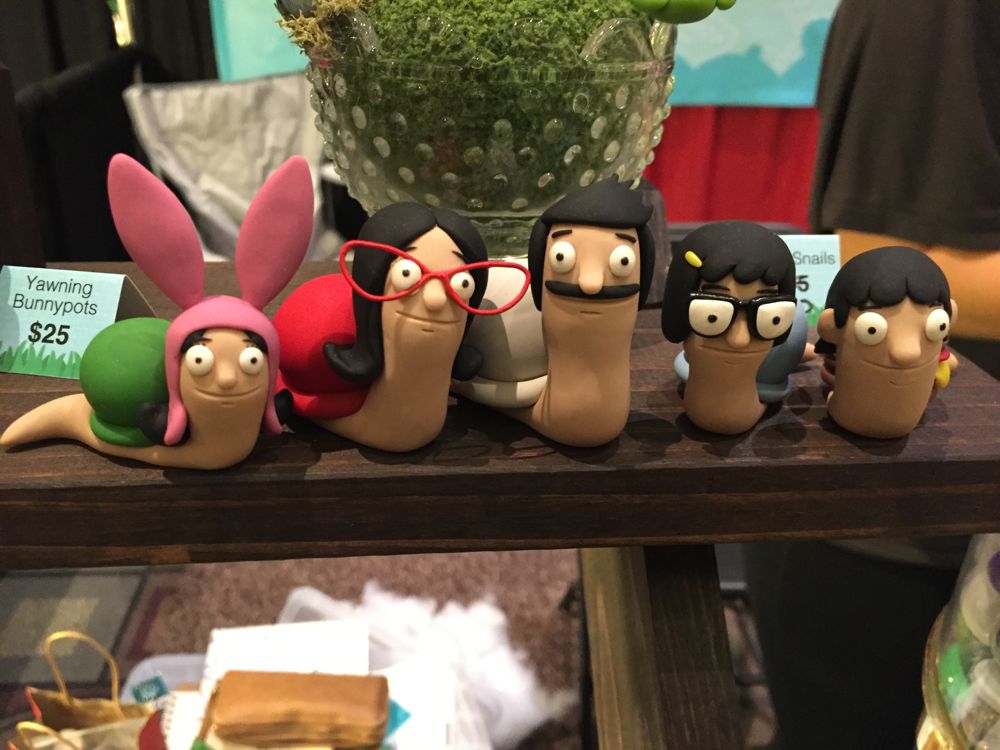 Macy McKenny, from Phoenix, gave the short version of her unusual story when I stopped by the booth for her brand, Simon Says Macy; a viral hit thrust her into the toy world full time and, so far, it’s been a good ride.

About a year ago, McKenny started sculpting with polymer clay. Amongst her experiments was Louise Belcher, of Bob’s Burgers, reimagined as a snail. Bento Box, the company that produces the hit cartoon series, saw photo of the piece and shared it via social media. Buzzfeed picked up on the story and McKenny’s life was changed in a matter of days. She quit her job and started making figures full-time. McKenny says she works more hours now than she did at her old gig, but she loves it.

McKenny brought a Bob’s Burgers snail set to DesignerCon and it sold fast, but that’s not all the crowd dug. She also sold out of a ghost character and says that her Tiny Saurs, roughly the size of a fingernail, were also quite popular. Then there’s the commission work that has become her “bread and butter” and it has nothing to do with Bob’s Burgers: McKenny makes figures based on people’s pets. If you want a 3 or 4 inch recreation of your cat or dog, she’s the artist to call. 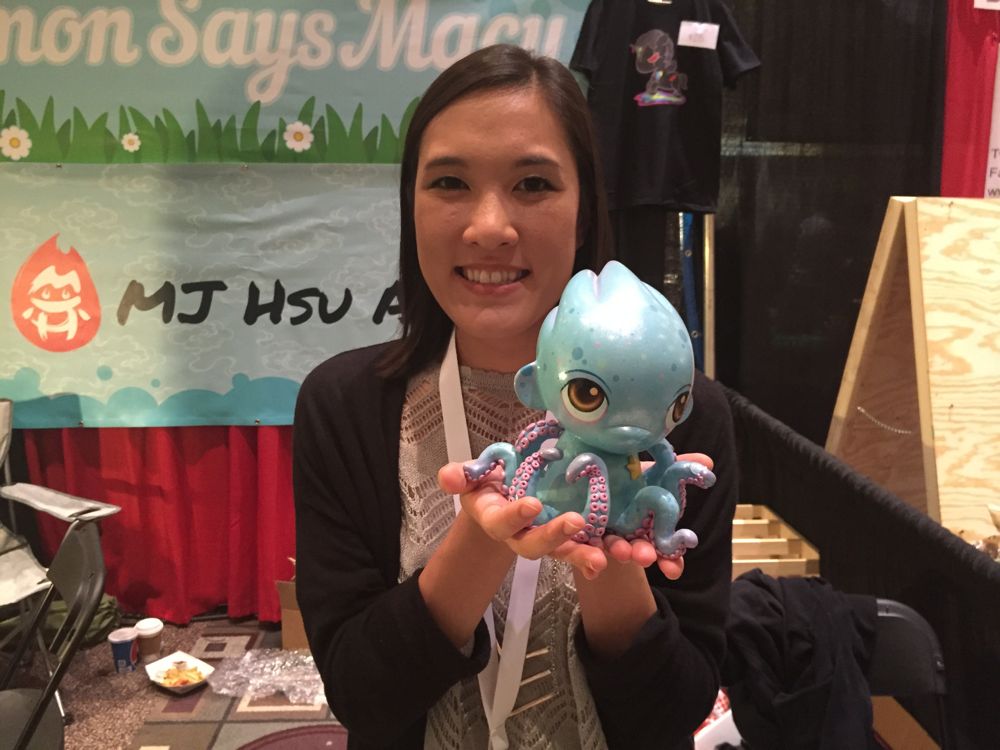 Frequently, people at DesignerCon mention that they were toy fans before they were toy makers. Take Mei-Jean Hsu, for example. She wandered into a Kidrobot store in New York and got hooked on the company’s popular Dunny figures. Soon, the L.A.-based artist found out about customized toy art and started doing it herself.

Hsu, who admits to being “shy” and says that she didn’t often show her work to people, started posting photos on Instagram. People dug her customs and she launched an online store. This was her first time vending at a convention and, by Sunday, little of her stock remained on the table.

Amongst Hsu’s hot sellers are “Delectable Dunnies,” in which the Kidrobot figures are hidden inside brightly colored cupcakes. Also popular are her “Aquacorns,” hybrid unicorn-sea creatures that started out as customized Tokidoki toys. One of her most adorable, though, was the baby Cthulu. You have to hand it to someone who can make even Lovecraftian characters cute.

9. You’ve Been Making Figures Since You Were a Kid. 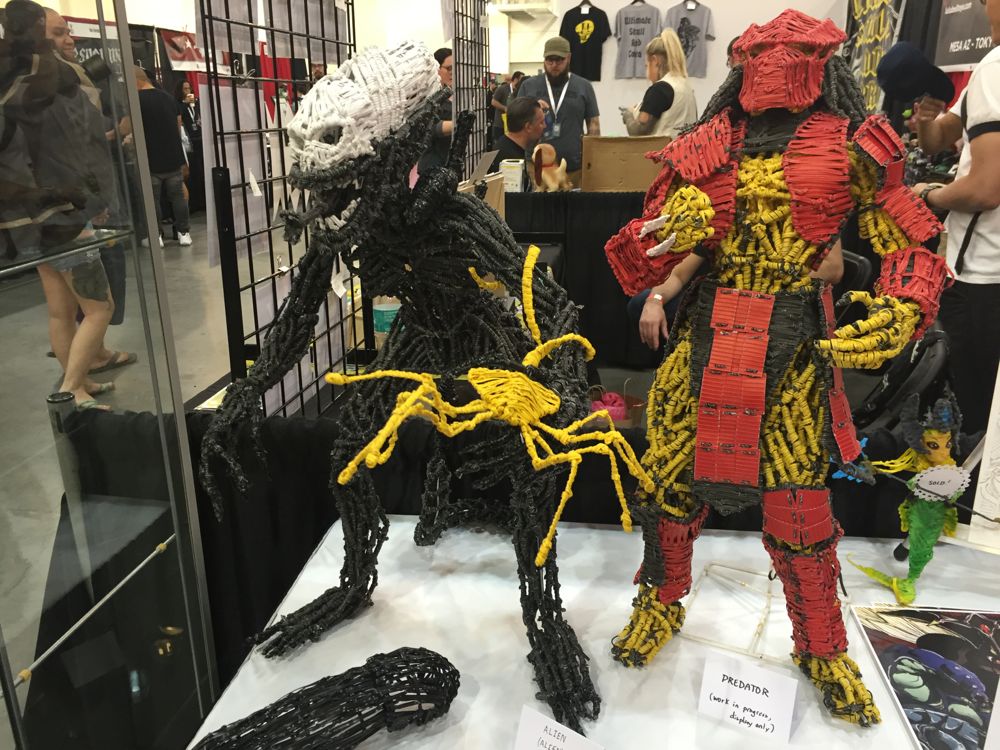 Bishop Pina made these large Alien and Predator figures out of twist-ties. (Photo: Liz Ohanesian)

When Bishop Pina was a kid, he made stick figures out of the twist-ties that he would gather on trips to the grocery story. Now 21, Pina, who traveled to Pasadena from the Southern California desert for DesignerCon, makes impressive sculptures with twist ties. Some of the pieces, like his Alien and Predator figures, are massive. He uses write armature for the base when he works on these.

These were by far the most unusual and captivating toys I saw at the convention. His Steven Universe figures, which included depictions of Garnet and Peridot, were packed with so much strength and action. He also made a rendition of Nami from League of Legends, which he said was one of the more difficult pieces to create, was impressive even to someone like me, who doesn’t play the game.

10. You Can Make Something That’s One-of-a-Kind. 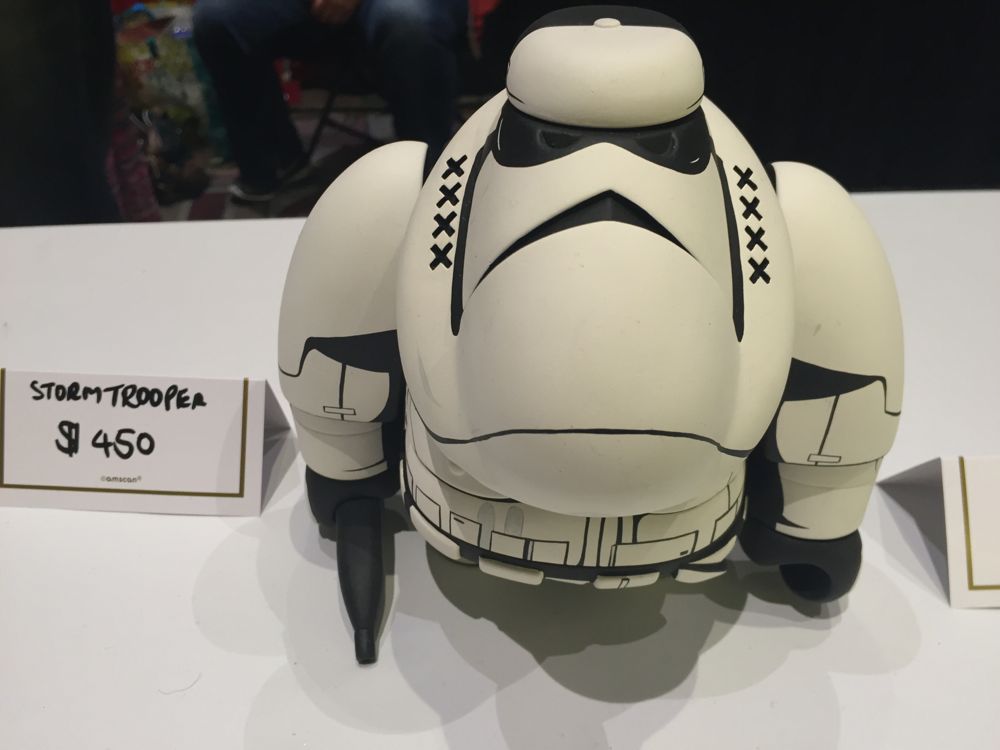 British artist Jon-Paul Kaiser had some beautiful, black-and-white custom pieces on his table at the end of the convention. Amongst them was a Stormtrooper, with bulging muscles and a beer bottle, that became a work of art.

Kaiser says that his best sellers were the small items, like his mini Squadt customs. As is typical in the customization world, Kaiser’s pieces are one-of-a-kind and he likes it that way. “I don’t like to repeat myself because that’s boring,” he says. “I don’t learn anything from that.”

That’s part of the allure of DesignerCon. Most of the finds here are either the only one existence or part of a very small run. If you don’t buy what you want when you see it, there’s a chance it will be gone when you return to the booth.

Earlier, when I spoke with Hana Kim of Supahcute, she mentioned that DesignerCon has become the event to spot “the next up-and-coming toy artist” and that sentiment became apparent as I walked up and down the aisles for two days. It was a convention filled with showstoppers. While you could say that about the exhibit hall spectacles at San Diego Comic-Con and Anime Expo, this was different just by nature of the fact that these weren’t corporate productions. You can do a lot with a blank Kid Robot figure. Hell, you can apparently do a lot with twist ties. The artists at DesignerCon were ready to show the crowd just that.

“Getting an Up Close Look of 8 New Virtual Reality Experiences“

“7 Things We Want to See in a Xena: Warrior Princess Reboot”

“7 Awesome Things We Saw and Heard at the Saturn Awards”

“10 Creepy Awesome Things We Saw at ‘Son of Monsterpalooza’”

“14 Episodes of Highlander You Need to Watch”

“9 Awesome Things You Might Not Know About Cartoon Network Studios”

“The 8 Goth-Rockingest Episodes of The Venture Bros.”